The alfresco venue, called Truckstop, was already buzzing an hour after opening at 5pm on Friday. People queued up at a range of food trucks parked on the newly transformed vacant lot just off the town’s main drag.

Hungry patrons of all ages lined up to compete for Thai and barbecue options, with French crepes available for dessert.

Families shared their meal around long picnic-style tables, while juniors had a safe space to run about and burn off energy before bedtime. Background music provided a casual soundtrack.

Upfront, a space for live music was ready for Barry Saunders and others to take the stage after 7.30pm.

Mark Danzer, owner of food truck The Crepe Makers, was behind the counter with assistant Adele Bentley. The Masterton-based mobile eatery had main course and dessert options on the menu, with cheese and tomato and sugar, cinnamon and almond fillings. Bentley said the outdoor venue was a great idea. 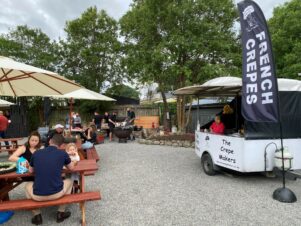 “It’s a good opportunity to have different food options in the area. In these times, it’s great people can get out and about safely outside and in a well-managed environment,” she said.

The truck will be at Truckstop on Friday evenings. Bentley commented on the transformation of the space.

“This was just a dirty, odd bit of land about four weeks ago. This has completely popped up. It’s impressive,” she said.

Brainchild of Greytown businessman Adam Blackwell, creating the space has been a collaboration among nine businesses who freely donated their time and skills to make the venue happen.

“It was an empty old piece of land that wasn’t being used for anything, so we decided it would be nice to do something for people in Greytown over the summer, especially families,” Blackwell said.

“Families in Greytown haven’t got many places to go. We thought it would be nice to create something really informal and casual.”

Inspired by similar venues in the United States, the venue is set well back from SH2 and can seat 100.

Blackwell owns the land, but the pop-up was developed by a team of locals.

“Greytown businesses have all contributed their time and their materials to do it. It’s a real Greytown effort.”

Not only for residents, Blackwell said visitors from Wellington, Hawke’s Bay and other places were expected over summer.

Different food trucks would be coming to vary the experience.

“It’s nice to combine it with a place to sit down and gather as a family,” he said.

“Organisers were thrilled to see mums and dads with little kids, young couples, groups of girlfriends and older couples visit the community dining and entertainment space each evening, indicating a real need for the venue,” she said.

The unlicensed venue at 102 Main St, Greytown, will be open every weekend until the end of March, except long holiday weekends.