The Morlands have been through tough times but have stuck strong as a family and helped others in need too. PHOTO/JOHN LAZO-RON

The Morland family have seen a lot of shocks in their lives, but they weren’t ready for the big surprise that left them with a golden heart … and feeling a little humbled. JOHN LAZO-RON writes.

If you’re from Greytown and watched Seven Sharp on TVNZ last Wednesday night, you might have caught some familiar faces.

After being nominated by two locals with no connections, the Morland family – Bevan, Jacqui, Thomas and James – who run the Offering cafe on Greytown’s Main St, won this month’s ASB’s Good as Gold award, which is a segment of Seven Sharp.

The Good as Gold award is granted to good sorts who regularly give back to their community. 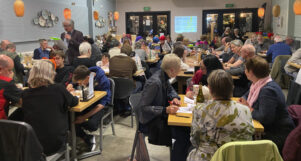 The Morlands host fundraising quiz nights at no cost at their cafe to help charity. PHOTOS/SUPPLIED

The Morlands are hugely involved in helping bring their community together to support everything from food bank drives to hosting fundraising quiz nights at no cost at their cafe.

They were given the shock of their life when the television show showed up at the cafe’s front door last week to deliver the award.

“It’s very humbling, and it still blows me out of the water thinking about it.

“ASB told me they get thousands of entries, and sometimes there are ones that just jump off the page and to be nominated by two people stood out for them.”

Jacqui said the family were still coming to grips with whether they deserved to have such an award given to them.

“It’s incredibly humbling and we are struggling with the fact whether we actually deserve it because there are so many people who do great things in the community,” she said.

“But it’s pretty awesome and we feel very blessed.”

Their backstory to why they are super involved in helping charities such as Life Flight and why they won the amazing award revolves around their 17-year-old son Thomas, who has epilepsy. 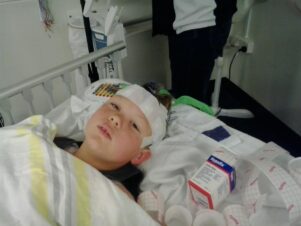 Thomas at Wellington Hospital after one of his episodes.

Thomas had a pre-natal stroke [12-18 weeks], which caused his brain to glitch and have seizures 10-15 minutes before they could see anything physically happening.

The family would spend at least two days a week in hospital because of his medical condition, which saw Life Flight fly Thomas out to Wellington Hospital four times in what the family said were life and death situations.

He needed to learn to walk and talk again after brain surgery at the age of 10.

“It was extremely scary and you could never take your time off him because he didn’t know the seizures were coming so he couldn’t tell you,” said Jacqui.

“So, in the shower, you’d have to be constantly calling out to get him to respond to make sure he was okay.”

One example the family gave was when younger brother James saved Thomas’ life at the age of six. They were both swimming in a pool, and Tom had a seizure. James held him above the water and called for help.

“If Tom was in the pool by himself he would have drowned. We were inside for a few seconds to get something and it happened that quickly.”

Bevan and Jacqui decided to take on running the cafe four years ago, as it was somewhere their son enjoyed spending time and took a special liking to the cafe’s hot chips. 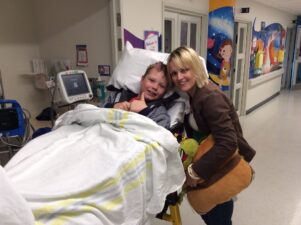 Thomas with mum Jacqui on one of his many visits to hospital.

They also decided to use it as a tool to give back to the community who rallied around them in their most challenging times.

Since then, Bevan and Jacqui have been known for doing anything and everything to support local communities. Besides quiz nights where they pay for the quizmaster and the staff to operate the cafe, they have seen kids raise money for jamborees, sports tournaments, the local toy library, mental health awareness, Life flight, and also raising money for children who are in a similar situation to Tom.

It doesn’t stop there. Bevan and Jacqui are the local drop-off point for charities Wairarapa Jackets and Wairarapa Blankets, distributing winter warmth to the whanau who needs it.

They have run Foodbank drives and Bevan has been seen on Facebook asking other businesses to get involved and challenging them to donate the same amount of breakfast cereals.

“The cafe has allowed us to have a really cool vehicle to deliver back to the community and help those who have supported us,” Jacqui said.

“Because of what we’ve been through, we’ve just aware the more everyone can help, the more better the community is.”

Bevan said, “But you don’t do any of this stuff to get rewards or anything like that. It’s totally full front trying to help people. We’ve had a lot of people help us throughout Tom’s and James’ and our lives, so it’s important that we can help as much as we can.”

Thomas, who can now tell whether a seizure is coming post-surgery, said he was “incredibly proud” of his family for their efforts helping others. 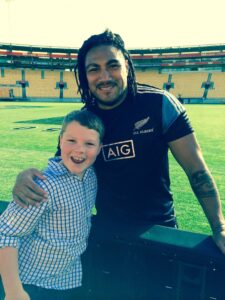 Jacqui said the fact Thomas can sense a seizure coming was a big relief for the family.

“It’s been a huge difference because it means he can go down to the dairy and take his phone and if he feels like one’s coming, he can let us know. We’ve spent a lot of our time in hospital, but we’ve had very few visits since the operation.”

Their appearance on television hasn’t gone unnoticed with Bevan saying he walked into the pharmacy the day after they went on air, to everyone in the store clapping.

With the award, the Morlands were granted $4000 to donate towards a charity of choice, which was Life Flight; and $6000 to use for whatever they wanted.

Bevan said they would use the money to buy a car and take a break to Riversdale, their “happy place”.

“Life Flight’s our charity of choice because of the effect that it’s had on our family and the help that they’ve given us.”

“We go to Riversdale once a year, so we’ll head there for a good old holiday.”