Green thumbs up for Kahutara School 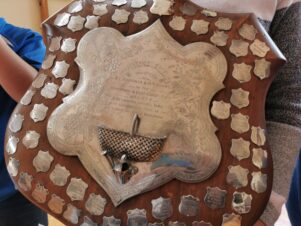 The Challenge Shield, which dates back to 1906.

Kahutara School, founded in 1898, celebrated their green-thumbed prowess last week, after the Wairarapa A&P Association awarded them with this year’s Challenge Shield, which recognises rural schools’ agricultural and gardening work.

Kahutara has been on a mission of amazing growing and restoration, having refurbished a growing site on the grounds, and worked to build the nearby Mangatete wetland, which is a man-made wetland, established thanks to the generosity of Fraser and Margaret Donald, who donated the land in 2017, having had three grandchildren attend the school.

This was aided by a grant from South Wairarapa District Council.

The wetland now supports a wide array of birdlife and the children walk to it often, across the paddock that separates it from the school, to play and explore.

At Kahutara, teacher aide Mary Mason has worked with pupils Taylor, Nate, and Danni to establish a varied growing area, from what was an old overgrown raised bed – Coral Aitchison and Melvin Pike, who presented the award, recognised the progress the school had made, and the fantastic photography and documentation which was presented in a booklet.

They also have a bee and butterfly garden, with several monarch caterpillars. “This type of education is really important,” Mason said. 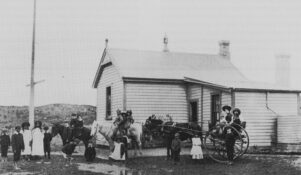 Kahutara School photographed in 1905, a year before the inaugural Challenge Shield. PHOTO/SUPPLIED

“They’re getting their hands dirty and it’s something they can see and touch… We’re even going to be having salad and hamburgers with some of the greens we’ve grown here.”

Mason also explained that in the wetland, children had individual trees that were theirs, that they took great delight in watching grow and change with the seasons.

Despite Kahutara being a little smaller than some other schools in terms of growing area, the judging criteria is very inclusive and allows for smaller schools making good progress to shine, and this is exactly what led to Kahutara claiming the prestigious shield.

The shield, which dates back to 1906, is a magnificent carved wood trophy with silver embellishments. It was given to the Wairarapa and East Coast Pastoral and Agricultural Society [now known as the Wairarapa A&P Society] in 1906, by WC Buchanan and HR Bunny.

The trophy was to be awarded annually, for the best agricultural plot at any school in South Wairarapa. The inaugural 1906 winner was Gladstone School. In the following years, Greytown, Belvedere, Featherston, Parkvale, Carrington, Dalefield, Longbush, Hinakura, West Taratahi, and Ponatahi have won the award. 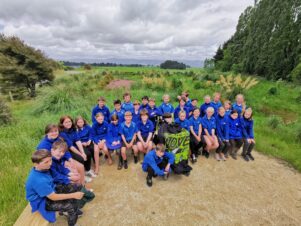 The last winner of this stint of awards was Clareville School in 1964 – the school would later close in 1974. Then, the trophy was forgotten about for decades until its revival by the A&P Society and the Rotary Club of Carterton in 2012. This year was the first time Kahutara School had ever won the award.

Many of the rural schools that competed decades ago sadly no longer exist, but there are many others now included in the revival of the competition.

Aitchison said she encouraged more schools to join, and was keen to emphasise that it was a level playing field in terms of judging, no matter the size, no matter the funding.

In 2011, Aitchison, convener of the competition, heard about the wonderful trophy, which had been discovered in a cupboard at the A&P showground office in Clareville. She saw the opportunities of the award and undertook the reinstatement of the Challenge Shield competition.

South Wairarapa schools were then asked for their support in making this possible, and the competition restarted in 2012, with judging taking place in March 2013 – judging has since moved to November each year to fit in with the school term.

Sponsorship was sought for the supply of seeds and Clareville Garden Centre and Nursery accepted the challenge, distributing a starter pack of growing materials to schools in that first year. 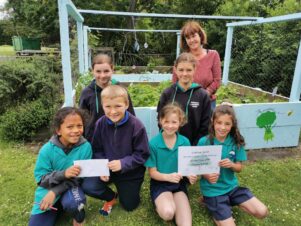 In 2020, Wairarapa A&P Society, in support of the Challenge Shield competition, arranged a sponsorship package with Garden Barn Masterton for plants and seeds to go to the participating schools, with a $300 first prize awarded to Kahutara to spend.

The Rotary Club of Carterton then awarded $100 as a second prize to Pirinoa, and $50 as a third prize to Gladstone, and these prizes can be utilised in any way the school sees fit.

The competition was judged by members of the Carterton Garden Club, with several categories – schools couldn’t just have a productive plot, they must also have shown knowledge, planning, and documentation of their growing year.

Many of the schools received support from parents, grandparents, and volunteers in their community.

“The participating children love this project as it enables them to not only grow plants and vegetables, but also teaches them to plan and record their progress,” Aitchison said.

“They learn to cook and consume the products they grow and take numerous photographs for their school journal.”