Good time to make a move Sam Gammie [with ball] is one of several Eketahuna players out with injury. PHOTOS/FILE

All go as teams roll up sleeves

Is this moving week in the race for the Chris ‘Moose’ Kapene Memorial Cup, with the potential of four teams breaking away or a logjam developing? CHRIS COGDALE previews the fourth round of the premier club championship. Greytown coach Mark Childs has warned rivals that there is a lot of improvement in the unbeaten competition leaders.

Greytown laid a marker in the sand last Saturday with their 63-21 demolition of Eketahuna for the Lane Penn Trophy and go into today’s game warmly favoured to extend their unbeaten record.

“We’re more focused on just building our game each week,” he said.

“We’re not the finished product yet, and I suppose that’s the exciting thing for Potsy [assistant coach Paul Pottinger] and I – there’s still heaps to work on.

“We just keep adding little bits each week to what we do without fogging the minds of the players, and that keeps them invigorated. You try and make training as enjoyable as you can.”

Childs expects Marist to be confrontational at setpiece and much improved from the first round.

“We are aware of their threats, and as we do every week, we seriously look at our opposition and see what we’re looking out for and where we can expose them.”

The return of prop-No 8 Chris Hemi from injury is a boost for the home side, although in-form openside flanker Rihi Brown remains sidelined.

Marist could be dealt a body blow with inspirational captain Peter Beech an unlikely starter. The big lock is struggling with a pinched nerve in his back, and his availability will decided this morning.

Beech, though was confident Marist have improved sufficiently since a 14-31 loss in the Town and Country series to mount a serious challenge.

“It’s the kind of game we want to go out and win. It’s the perfect scenario for us to go out there and upset the leaders,” he said. 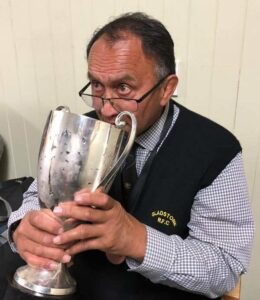 Gladstone coach Steve Thompson with the Tui Cup in 2018.

East Coast coach Aaron Matenga says more urgency and accuracy is needed if his team are to beat Gladstone and get on track for the top four.

The Coasties are sixth-equal on five points, and a loss would almost end their semifinal prospects. A win would move them right into contention.

Standing in their way are an experienced Gladstone side, who have hit form in the past two rounds, beating Martinborough and Pioneer convincingly.

A win for Gladstone would put them in the box seat for a spot in the top four, whereas a loss could see them as part of a logjam.

Matenga’s confident they can start playing exciting rugby if the Coasties can be more precise with their decision-making. “If we can improve in these areas, I think we will be okay,” Matenga said.

Matenga expected a different Gladstone team from the one Coasties beat in the Lane Penn Trophy.

“They are well-coached; I’d expect them to be very physical upfront, and we know they have speed out wide. I think it will be a tough game.”

COGGIE’S PREDICTION: Wily Gladstone coach Steve Thompson has his team working into the competition nicely and will have his charges primed for a big effort at Whareama, where it’s always difficult for visiting teams. Winning form is good form, so Gladstone narrowly.

Eketahuna have an injury crisis with several players out or doubtful for today’s must-win clash.

Former Manawatu Turbos midfielder Frankie Bryant has a suspected broken forearm, and outside back Matt Raleigh is out with concussion, but it is the loose forward trio that is hardest hit.

Sam Gammie is on the sidelines with a shoulder injury, Johan van Vliet has a badly bruised thigh and a swollen hamstring, and BJ Campbell is away. Winger Rhys Christian is also unavailable, stretching the resources of the club to its limit.

Both teams are coming off heavy losses – Eketahuna 21-63 to Greytown and Pioneer 19-40 to Gladstone.

Eketahuna co-captain Robbie Anderson said despite that scoreline, the team showed enough in phases at what they could do, but he expected the team to be up against it with the injury toll.

Pioneer coach Koti Whittaker said the break over Queen’s Birthday Weekend had not worked for the team.

“It wasn’t a good thing to lose, but it was a good wake-up call, and the guys know what we did wrong,” he said.

“We’re taking it one game at a time, but we know it will be tough in Eketahuna.”

A Pioneer win would consolidate their place in the top four and almost end the top four chances for Eketahuna, who must win to remain in the hunt.

COGGIE’S PREDICTION: The injury toll at Eketahuna is a big blow. Eke will never say die, but their lack of depth may hurt them. The predicted heavy track could be the leveller. Pioneer in a close one. First-five Sam Morison has been controlling play well for Carterton.

It’s not quite the dance of the desperate – but it’s getting close for both teams. Carterton [one win] are fifth on six points, while Martinborough trail the field with just two bonus points.

Despite their tenuous position, Martinborough coach James Bruce remains confident that the 2019 champions can make the top four.

“No one is really seeing it like desperation. We’ve lost two games in the last minute, and we’re not that far off the pace, if at all,” he said.

For one of the few times this season, Bruce will have close to a full-strength side with the returns of flanker Dan Green and lock Beaudine Hawkins.

Carterton coach Neil Rodger is also likely to have a fully fit squad, with only veteran lock Lachie McFadzean in doubt with work commitments.

A Carterton win on the club’s Old-Timers’ Day would position the team well for a charge at the top four.

COGGIE’S PREDICTION: If the rain stays away, this has the potential to be a free-flowing, high-scoring encounter, with both teams possessing attacking backlines. Toss a coin – neither winning would surprise me – but I’ll go for Carterton just.