Harley Kaipo, head arborist and trainer getting the tree ready for felling. PHOTO/SUPPLIED

It took just three hours on Monday to get rid of what nature had taken more than 100 years to grow. 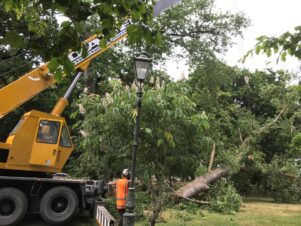 An English elm in Queen Elizabeth Park, standing 28.5 metres tall and weighing more than 20 tonnes, was taken down limb by limb, then chopped and mulched up by Wairarapa Treescaping before lunchtime.

Masterton District Council had ordered the sick tree’s removal because it had started dropping limbs making it a danger to park walkers.

The removal also provided more room for the oak trees to flourish, it said.

An arborist was up in the tree by 8.30am to assess where it was solid before attaching chains to two parts of each limb to be felled. The chains were then hooked on to a crane.

Each limb to be taken down was then sawn through at the base.

Donald Saywell has been operating cranes for 12 years and was trained by the late Toi Walker of Masterton who was well known in the industry for more than 40 years. Saywell skilfully manoeuvred the crane to pull each limb away and land it to the ground without damaging other trees.

“It’s a bit like a fishing trip, reeling in a shark then landing it in the right place,” Saywell said.

The ground crew made quick work of the clean-up with chainsaws and a heavy-duty mulcher.

All that remained after the limbs were removed was the butt end which was 1.5 metres in diameter.

Eighteen-year-old Samantha Hallam stepped out of her job at Z Energy Masterton for her second day of work experience with Wairarapa Treescaping. She likes the outdoors so was happy to be with the crew.

“I am loving the work,” Hallam said. “It is great to be outdoors and it’s interesting.” 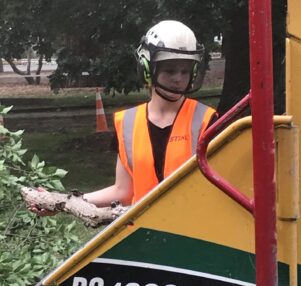 Samantha Hallam on work experience with Wairarapa Treescaping assisting with the mulching of the felled Elm tree limbs. PHOTO/SUPPLIED

“I want someone keen and yeah, we could look to employ her if she is ready,” Walsh said. “It is good for the guys to work with a woman in the team too as she will be just as capable.

“We are looking to offer Sam a three-year apprenticeship … there’s a proper career in arboriculture.”

The council confirmed the wood is being given to Masterton Rotary and the Under-14 Douglas Villa soccer team for their fundraising.

The next big job for the crew is to take out about 25 large gum trees at the Colombo Rd entrance to Henley Lake. This will be done when Lakeview School is closed for the summer holidays.