Gifted musos have what it takes Last weekend, I got to attend the grand final of the 2022 Straight Flush Talent Wairarapa competition, held at Carterton Events Centre – which, despite the weather, brought in a near sell-out crowd.

Thirteen finalists performed across two categories (Under 14 and Over 14), enthralling the audience with everything from soulful ballads, to tap routines, to acoustic pop-folk, to 90s-inspired punk rock.

This was my second time attending a Talent Wairarapa Event (I volunteered as a judge for the auditions round back in 2019), but first time at the finale – and I was promised a “wonderful night out”.

And it certainly didn’t disappoint: the calibre of the performances, professional stagecraft and electric atmosphere made for a winning combination and it was a joy to witness.

Opening the show was Dave Marks, who showed off his skills on the hand pan (a hand-held drum, inspired by Asian and Caribbean steel percussion) — using the instrument to create various layers of sound and vibration.

Hand pans, a popular feature on YouTube, are often used in meditative music – and Dave’s playing produced an effect that was simultaneously soothing and eerily haunting. Beautiful work. 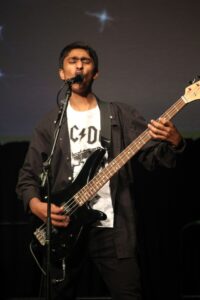 Nikhil Satya, Captivated bassist, gives it his all.

Up next was Henare Kerehi, who offered up a powerful rendition of “When We Were Young” by Adele. Apart from a few nervous cracks, Henare had incredible projection, annunciation and vocal control – especially in the final crescendo – for someone so young.

Bringing the energy up a notch was dancer and Talent Wairarapa veteran Ava Saba – who, looking like a genuine pop star in her gold sequined dress, treated the crowd to a lively and sassy modern jazz routine.

Also wearing out the stage with fast-flying feet were the In Motion dance troupe: three charismatic young performers who made clever use of tap choreography, costumes, and props to tell a story of “going from busking to Broadway”.

Joining them in the under-14 category was budding-singer songwriter Jack Brown, whose gorgeous original ballad “She’s Asking For It” – a heartfelt, folksy protest against sexual harassment, racial profiling and body shaming – brought the house down.

Rounding out the under-14 category was Olivia Church and her sincere take on Pink’s Top 10 hit “All I Know So Far”. Olivia was a little hesitant in her performance – that will improve with time – but had a lovely tone and clearly emoted the empowering message of the song. 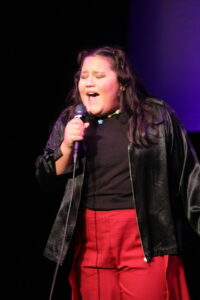 Opening up the second act was Charlie Matthews, another Talent Wairarapa regular, who showcased his original tune “Invincible”, winning praise from the judging panel for his mature lyrics and complex chord progressions.

Also sharing his songwriting chops was Jack Moser, whose smoky vocals and masterful keyboard playing lent themselves well to a mournful tale of unrequited love.

One of my favourites was pianist and vocalist Kolya Marks, who infused his cover of Rufus Wainwright’s “Going To A Town” – a blistering commentary on US social politics – with passion and biting sarcasm.

Kolya had a beautiful natural break in his voice and brought emotion to every touch of the keys – so it would be a treat to hear him play his own music.

Turning up the volume were Wairarapa College bands Dragonfly and Captivated, who commanded attention with their on-stage chemistry and high-octane original songs “What You Meant” and “Control”.

A special shout-out has to go to Dragonfly frontwoman Katie Harris, whose sultry vocals and swagger were reminiscent of a young Gwen Stefani, and Captivated bassist Nikhil Satya, who was every inch the showman!

Finishing the show with a bang was drummer Coby Nielsen, who took the audience on a journey through his musical evolution – from the Masterton District Brass Band to punk rock virtuoso.

The winners were announced soon afterwards: Maceo emerging victorious among the Under-14s (with Henare and Jack Brown as runners-up) and Captivated taking home the top prize for the Over-14 category (with Jack Moser in second place). Ka pai to mahi, rangatahi mā!

Big props have to go to Carterton Rotary (and various sponsors) for all their work behind the scenes.

It’s a tricky time for event management, with covid still doing the rounds – and I understand contestant numbers were down this year, due to illness. Nevertheless, Rotary pulled out the stops to create a slickly-produced, seamlessly-organised showcase – without sacrificing the relaxed and supportive atmosphere Wairarapa is known for.

Of course, it would have been great to see a bigger variety of age groups represented on stage. But no matter – our young people work so hard at their craft, and they deserve their place in the spotlight.

Congratulations to all the contestants – it takes tremendous courage to perform for an audience, and you all, as the young people would say, “absolutely smashed it”. Keep doing what you love.