Mark Fricker is one of several power hitters in the Giants Red batting lineup. PHOTOS/FILE

Winning both sections of the revised Intercity Premier Three Men’s Championship is a realistic goal for Giants.

That’s the view of president Chris Feary, who plays for Giants Red in Section B of the revised competition.

The 10 teams have been split into two sections of five, with the teams playing a full round robin before playoffs and finals. Giants Blue will play in Section A for the top five sides from the pre-Christmas competition, while Section B comprises the bottom four teams plus Giants Red.

Feary is confident both Giants teams can figure in championship calculations.

“It’s looking good for the top five and bottom five, and we could win both sections,” said Feary.

“The Blues went through unbeaten, and if the bottom five teams couldn’t beat them it’s looking good for us old fellas.”

Giants Blue dominated the pre-Christmas competition – winning their six games, most by large margins, with their closest game a 5-3 win over Kapiti Coast.

Player-coach Justin ‘Chunky’ Karaitiana has retained a settled squad of 15 players for the second half of the season, with most of the players moving up from the club’s successful age group teams. 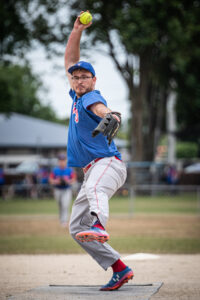 Michael McDermott has been dominant opening the pitching for Giants Blue.

There is plenty of experience though with Michael McDermott likely to open the pitching, with Karaitiana to come on to close out the match, a formula that worked well in the first half the season.

The experienced heads of Nico Broughton and Chris Cox complement a batting lineup of promising young players such as Trey Feary and Rico Hillman.

Giants Blue kick-off tomorrow with a home game against Dodgers Black. The game is a step into the unknown for the Blues, having won their first-round clash by default. However,

Dodgers’ record of four wins, three losses, and a draw would indicate that the home side deserve to start warm favourites.

Before Christmas, Giants Red had played in the Hutt Valley President’s Grade, where they were plagued with regular defaults because some teams refused to travel over the Remutaka Hill for games at Masterton’s South Park.

The Giants club were also keen on the team moving to premier three because the team’s older players were too serious and competitive for the socially orientated President’s Grade, and to provide the club’s younger players another avenue to play at a higher level. That has seen Julian Ellmers, Thomas Kawana, Riley Hanson, and Jesse Neumann move from the Blues to the Reds.

The vastly experienced Tony Nixon, and Feary will share the pitching duties, while the batting line-up is full of experience and power hitters in Gordon Wilmshurst, Terry Waitere, Willy Waitere, Matt Kawana, and Mark Fricker.

Nixon is unavailable today, so Feary will be on the mound for the first-round game at home to Totara Park Gold. Little is known about the visitors, who defaulted their first-round clash with Giants Blue, and finished with only one win from their eight games.

The Giants women are targeting their fourth win of the season when they play WASC at Fraser Park, Lower Hutt. Giants are fifth in the Hutt Valley Major B Championship, and WASC are languishing at the bottom of the table. Giants won their previous encounter 15-0, and a similar scoreline would not surprise.