Giants will only field one men’s team in the Intercity championships because of a lack of numbers.

The Masterton club will start their season on Saturday with a home game at South Park against fierce rivals Hutt Valley Dodgers.

However, club president Chris Feary confirmed on Thursday there weren’t enough players turning up to training for two men’s teams, so the club had decided to go with a premier three team and use this year to build for the future.

“There are about six of the premier two team from last year, and we’ve got a lot of young kids too,” he said.

“We have two or three Under-15s come up, and that makes five in that 15-17 age group now, so it’s a matter of fostering them, and there will be a good mix of youth and experience.” 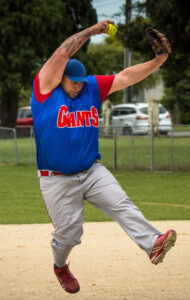 However, the loss of power hitter Matt Kawana because of an elbow injury is a big blow to the team, who will again be coached by Russell Kawana.

Giants made the final of the premier three championship last season, losing to Paremata-Plimmerton in the decider.

With the quality of players dropping down from premier two they will be among the favourites in the combined Wellington-Hutt Valley championship.

“But if by Christmas we’re top of the table we could end up getting moved up.”

Feary predicted a close competition with several other clubs’ playing stocks affected by the fallout from the covid-19 restrictions.

“Looking through the Intercity lists, there are a few clubs that don’t have the team you would expect them to have,” he said.

“Kapiti would be one. Last year, they had a premier reserve, premier two, and premier three, and they only have a premier three now, so they are probably going to be stacked to the hilt.” Giants won their most recent clash with Dodgers 12-0 in last season’s semifinals, but Ferry expected a tough encounter with their old foes.

The first pitch will be thrown at South Park at 3.30pm Saturday.

There is good news with a boost of girls and women wanting to play, and Giants will field two teams in the Hutt Valley Major B championship.

Feary said last season’s team have again entered and will be joined by the women’s team from the 2018-19 season.

“The other women’s team has come back because their daughters are now old enough to play in the Major B grade and they’ve come back for one or two seasons, so a lot of them can play with their daughters.”

The club have also entered teams in the Hutt Valley Under-15 and Under 13 grades.

Competition in the women’s and age grades will begin on October 31.