Police say there has been an increase in vehicles thefts. PHOTO/STOCK.ADOBE.COM

A woman who relocated to Masterton a month ago has had her car, belongings, and livelihood stolen in one fell swoop.

The videographer was one of three victims targeted by thieves in Lansdowne on Saturday night and the second resident of Alamein Court.

Her car, which contained all her work gear, was found by police in Masterton in the early hours of Sunday morning.

All her belongings had been taken. Police confirmed that from 11pm January, Saturday 1, and 5am January, Sunday 2, three cars were stolen in the area.

The woman, a solo parent and expecting her second child, moved to Masterton for a new job at the start of December.

She said the timing of the theft was “unbelievable” and was worried she had been targeted.

On New Year’s Day, she made the long drive back from Auckland after spending Christmas with family and arrived home about midnight.

After eight hours of driving, she said she resolved to put her child to bed and unpack the car in the morning.

Police contacted her Sunday morning and said the car, which had contained Christmas presents, clothes, and videography equipment, had been picked up by police.

The woman said it was hard to comprehend and the “worst possible timing”.

“It’s just unbelievable. If it had been the day after, I wouldn’t have had all that stuff in the car.

“I wouldn’t normally do that. I’m really careful.” 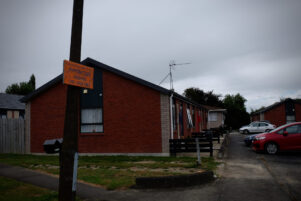 She said only her child’s car seat and a toy were visible, and everything else was in the boot.

She could not work without her tools and feared she would be on maternity leave by the time she had replacement equipment.

She had posted messages on community pages requesting others keep an eye out for her belongings and had visited Cash Converters and pawnshops in the region.

She said she was thankful for the support and generosity strangers had shown her.

He said a “group of young people aged from 11 to 15” had been identified in several thefts.

Miller said police were working with them and their families through Youth Aid.

He said no particular area in Masterton was being targeted, and thefts happened in eastern and western suburbs.

He said vehicle owners could deter thieves by using a steering wheel lock or installing an immobiliser.

Police said where off-street parking was unavailable, cars should be parked in well-lit areas, and they advised people to remove all valuables.

From December 2020 to November 2021 Police Data NZ recorded 50 victimisations related to motor vehicle theft or theft of vehicle contents in Masterton, compared with 11 in Carterton and 23 in South Wairarapa.