Greater Wellington Regional Council is getting an influx of complaints about wild pigs and deer in Wairarapa.

Catchment management group general manager Wayne O’Donnell told an environment committee meeting that there had been complaints about deer throughout the northern parts of Wairarapa, and pigs in coastal Wairarapa.

He said there had also been complaints about wild animals in the Hutt Valley relating to pigs and deer, in Makara in relation to pigs, and areas surrounding Akatarawa.

O’Donnell said he saw the increasing number in pigs and deer as a problem and had spoken with the Department of Conservation [DOC] about the issue.

He said that there had been indication that DOC would form a deer response plan because the complaints were nationwide.

“They haven’t really turned their mind to the pig issue even though that’s a wild animal in the wild animal control act.”

The Wild Animal Control Act 1977 is administered by DOC.

O’Donnell said now was a good opportunity to politically connect with DOC to see if some changes could be made.

“I expect all regional councils are fielding these types of complaints.

“Most of us do not have deer and pigs in our regional pest management plans, except for in our key native ecosystem areas.”

O’Donnell said the Wild Animal Control Act needed to be reviewed because it was no longer fit for purpose.

Councillor Jenny Brash said she managed the act in the 1990s and it wasn’t fit for control then either.

“I totally agree with Wayne, it was an anomaly, and it should be revised,” she said.

She said there was an attempt to introduce a national deer control plan in the 1990s but it “fell flat and never progressed” under Nick Smith, who became Minister of Conservation in 1996.

Councillor Prue Lamason said some of the out-of-control pig population could be due to hunters breeding and releasing pigs.

“They are really wrecking people’s sections.” However, GWRC Farming Reference Group chair Barbie Barton said the group had discussed changes in hunting behaviours and the impact this is having on the control of ungulates – particularly deer and pig.

She said the group had observed that the changing practice of hunting is to hunt for only the amount of meat needed, rather than recreation.

“The impact is that fewer numbers of these animals are being killed. As these animals fall under the Wild Control Act, management of them rests with the Minister of Conservation.”

DOC biodiversity threats project lead Dave Carlton said it was an offence to release pigs into the wild and DOC would investigate the matter and look to prosecute if warranted.

“If an individual is found guilty the penalty is a fine of up to $100,000 or a maximum of two years in prison.”

Carlton said DOC is developing Te Ara ki Mua, a strategy to reduce the impacts of deer and other ungulates while acknowledging there are some social, recreational, and cultural value to these species.

“Wild animals are increasing in numbers and expanding their ranges in parts of New Zealand. Nationally DOC prioritises its wild animal management to sites where specific protection of species or ecosystems is required.”

Carlton said in Wairarapa and the wider Wellington Region, DOC worked with contractors to undertake goat control in priority areas. 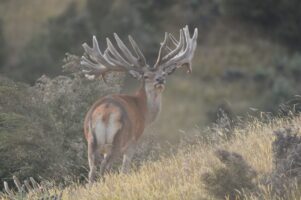 Hunters are increasingly hunting for meat, not recreation. PHOTO/FILE

“We also work with iwi, recreational hunters, and community groups to control deer and pigs. In addition, some areas are approved for Wild Animal Recovery Operations [WARO].”

He said the purpose of the Wild Animal Control Act was to achieve concerted action against the impacts of wild animals on vegetation.

Carlton said the development of the Te Ara ki Mua strategy would consider if any update of the act is required.

There has also been an influx in illegal poaching in New Zealand, with 82 proceedings initiated by police for unlawful hunting in the South Island alone.

He said at the time that police had been quick to apprehend the poachers, but he was disappointed in the lack of “firm action” in prosecution.

Poachers can be charged under the Wild Animal Control Act but there have been calls, to change the Arms Act so police can charge hunters under that instead.