Gallipoli through a father’s eyes Hugo Manson with a photograph of his father Cecil in uniform. PHOTO/SUPPLIED

Gallipoli holds a special place in the history of New Zealand. Masterton’s Hugo Manson heard first-hand from his father what it was like to be there. STEVE RENDLE talked to him about how Gallipoli got him to New Zealand.

“In effect, Gallipoli was his first job . . . and within an hour of his first job, the soldier next to him was shot dead.”

Masterton’s Hugo Manson is talking about his father – or, more accurately, his father’s experience of the World War I campaign regarded as a key part of nation-building for New Zealand.

But Cecil Manson wasn’t fighting with the Anzac troops – his British 2nd 4th Queens Surrey Regiment was operating over the hill from the New Zealanders and Australians on the Gallipoli Peninsula.

“But he met a lot of New Zealanders, and he was terribly impressed,” Hugo Manson recalls. “He thought they had an extremely free way of treating things and treating people.

“He always hated the English class system . . . so when he was 19 he decided he wanted to get to New Zealand.”

Gallipoli, then, was the reason Hugo ended up growing up a New Zealander, after being born in London in 1941. 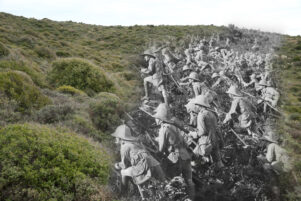 A digital composite image shows British troops, in 1915, advancing up a hillside on Suvla Bay, on the Gallipoli Peninsula, as the landscape was 100 years later. PHOTO/GETTY IMAGES

Hugo features in The End of The War? exhibition at Pukeahu National War Memorial Park, recalling what his father had passed on about his experiences.

Unlike many veterans of World War I, Cecil Manson talked often about the war – but not with any sense of glory or heroism.

“I learnt a bit about it because I think he was fascinated by the ridiculousness of it,” Hugo says.

“He never talked in a heroic way . . . He had a sense of wonder, a sense of the nonsense of it.

“I think he found the whole thing ridiculously shocking.”

Elements of the ridiculous appear to have been part and parcel of preparations for a war that was quite unlike conflicts before it.

Within months, they were on the ship heading to Turkey.

“They went off with something for the trip,” Hugo said.

“My father was given a writing desk that folded away in a case, so he could properly record his war experiences.

“He was carrying it up the hill on the first day and an officer said ‘I would drop that if I were you’ and so he did, never to see it again.”

He also recalled a senior officer lying against a tree on that first day, with a smile on his face saying, “on you go boys, I’ve been shot in the foot”.

The officer was destined for the hospital ship moored offshore, which Cecil Manson recalled was lit up like a cruise liner at night, a stark juxtaposition with the situation ashore.

“On his very first day there, everything became calamitous . . . I think it was the first time he thought he would be better off dead,” Hugo Manson said.

The toll on Anzac troops is something familiar to Kiwis but the British suffered similar casualties.

“He went to Gallipoli as a junior officer and a few months later he left as an acting captain, because those above him had been wounded or killed.”

Having survived, he had a view of the campaign that differs from the conventional assessment of the operation.

“It was always treated as a failure militarily, but he saw it as a triumph of the way people could survive and do things, and look after each other,” Hugo says.

“And he was a great admirer of the Turks – even when he was there.”

After Gallipoli, Cecil Manson joined the Royal Flying Corps as an observer, flying planes made of cloth and string, dropping bombs by hand.

He went on to survive nine crashes, and the rest of the war.

After it was over, he worked as a foreign newspaper correspondent, and sold fire extinguishers for a time, and also trained as a photographer and artist.

In 1938 he met Celia Drummond, from a long-standing Wairarapa family.

Unfortunately, she was at the end of her time in Britain, and just days away from catching the boat home.

Undeterred, Cecil was relentless in his contact via letter and telegram, and Celia returned to Britain in 1939, and the pair married in France in 1939.

They moved back to London just as war was declared once more.

“He was 45 when the second world war came around – he was one of those who copped them both,” Hugo said.

Too old to be sent away to fight, for years after the war Cecil maintained he was simply involved in administration in the air ministry.

But then people started writing books about the top-secret activities involving the captured German enigma machines at Bletchley Park.

“It wasn’t until I was in my 40s that he told me he was working with people from Bletchley Park,” Hugo recalls.

“He said ‘I suppose that now my bosses are all writing books, I can tell you about it’.”

His father’s considerable involvement in war, particularly the first, is something Hugo Manson puts down to a “sense of duty”.

“The curious thing for me was that he was not a warmongering person. He hated the army or any military thing like that.

After the second war, the family moved to New Zealand in 1947, staying for a period in Masterton, before moving to Nelson and, later Stokes Valley and Eastbourne.

Cecil and Celia wrote numerous historical books and articles together.