GRACE PRIOR and SUE TEODORO
grace.prior@age.co.nz/sue.teodoro@age.co.nz

Galeforce winds caused havoc across Wairarapa on Friday with multiple trucks rolling, at least one power line down, power outages, and the Remutaka Hill Rd closed. 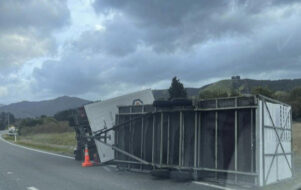 Power was cut to more than 2000 properties from midnight to noon on Friday due to strong winds. Late Friday afternoon, Powerco reported outages in Masterton, Mount Bruce, Carterton, West Taratahi, Longbush and Featherston.

Trucks rolled in separate incidents on State Highway 2 north of Masterton, and in Carterton.

“It is highly likely wind hitting the high sides of the vehicles with force caused them to tip over,” he said.

“The wind has got so strong the Remutaka Hill Rd closed for a period. They have also restricted traffic through the Mt Bruce area,” Osland said.

A truck and trailer were blown over near Mount Bruce early yesterday morning, a police spokesperson confirmed. The incident happened just before 4.30am at the intersection of Kiriwhakapapa and Ruamahanga Gorge Rds, blocking the southbound lane of SH2. No injuries were reported.

Masterton real estate agent Mitch Wakefield was on his way to Eketahuna with a client when he noticed one of the trucks on its side.

“The wind sounded like a hurricane. It’s the worst wind I’ve ever experienced in my life. It was absolutely crazy. We were standing in Eketahuna getting blown off our feet. We got straight back in the car, you couldn’t stand up.” As they drove to Eketahuna, they saw an Expol truck on its side. By the time they drove back, a Big Save Furniture truck had also tipped over.

“The Big Save truck had blown all the way off the road into the bush.”

Later in the day, around 1.30pm, Osland said another truck was reported on its side near East Taratahi in Carterton. Three vehicles were reported to have rolled in that area, with two trucks affected earlier on.

Police were also called after a power line fell into a field on SH2/East Taratahi Rd at 3.15pm, with the fallen lines seen emitting sparks. Traffic was diverted for some time.

“Police saw the power line drooping over the paddock and notified the power company. It is off the road on private property,” Osland said.

“There is no immediate risk to the public as far as I’m aware.”

Osland said people should take care in the conditions. Metservice warned of severe northwest gales up to 130kmh in exposed places.

“Strong wind gusts could damage trees, powerlines and unsecured structures. Driving may be hazardous, especially for high-sided vehicles and motorcycles,” it said.

A Fire and Emergency spokesperson said the strong gusts were expected to hit Wairarapa on Friday.

“We attended several weather-related incidents in the area overnight. We have mainly assisted with securing fences, structures, trampolines, light poles and powerlines,” they said.

The spokesperson said high winds in Otago and Canterbury on Wednesday caused previous fire sites to reignite and asked those who had lit outdoor fires in the past week to check they were completely out.

Discarded ashes should be soaked to make sure they were completely cold.

“Bring in all loose furniture around your property and tie down trampolines.”

Fallen trees and branches could cut power, and any fallen lines should be treated as though they were live. Drivers should keep an eye out for debris.