From the wheelchair to bodybuilding champion Jacob Walsh in hospital for his monthly IVIG transfusion in 2018 before beginning training. PHOTOS/SUPPLIED Eight years ago, nine-year-old Jacob Walsh was wheelchair-bound and unable to speak.

Ten days ago, the Greytown teenager was strutting his stuff on stage at Wairarapa College, on his way to victory in the Nabbba [National Amateur Bodybuilding Association] Lower North Island Board Shorts class.

“It is not something that you genuinely believe if someone told it to you, but I’m in here having immune therapy treatment and last week I was doing a bodybuilding competition,” said Walsh from his bed at Wairarapa Hospital.

“I still have my fake tan on, so when I turned up, they didn’t know I was doing it. They thought I needed kidney dialysis or something.”

Walsh had been sickly all his young life, but his health took a turn for the worse when he was about eight.

He contracted streptococcal septicaemia, which left him struggling to walk and speak clearly.

It took another three years of medical tests before he was diagnosed with paediatric autoimmune neurological disorder associated with streptococcal infections.

“I didn’t start treatment in hospital until I was 11 years old because they were figuring out what I had to begin with,” he said.

“I had my spinal fluid tested, and that’s when they found out that I had an inflammation to a part of my brain that indicated what I had.”

He said the condition manifests as a tremor, a bit like Tourette’s syndrome, or Parkinson’s disease, and that it needs intravenous immunoglobulin transfusions every four weeks, normally over a weekend from Friday to Sunday.

In 2019, with his condition under control, the 15-year-old Walsh decided he needed to do some physical activity and chose the gym because he had never played a sport. 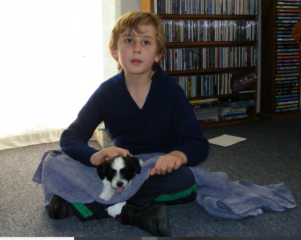 Jacob Walsh in 2012 when he was struggling with walking and talking at this age.

“I had chronic asthma at the time as well, so I started weightlifting at Strength Nation Gym in Carterton, and I weightlifted for about three months, and I felt it was starting to help manage my condition, so I kept going with that.

“So, it helps me manage that, and it helps me to manage fine motor movement, because that is something that I’ve always had a difficult time with. Weightlifting has basically improved that and made it so that I’m at a normal state.”

Eighteen months later, Walsh was impressed with the difference in his appearance, so he took the next step to bodybuilding and targeted the Lower North Island Championships at Wairarapa College on October 2.

“I thought it would be a good idea to do bodybuilding because I’d had many people say that I was looking good, which was something I had never been told in my entire life.

It is not only Walsh’s physique that has improved with the bodybuilding, but it has also made a world of difference to his confidence. Jacob Walsh in 2013. He was unable to walk reliably, and his verbal and motor tics were debilitating. He had gross and fine motor tics as well as coprolalia.

“It changed it immensely because before I would refuse to take part in anything physical. I would be in school and get to PE, and it was just something I would straight out wag, and I have no problem with that now.”

One facet of the build-up to stepping out on the stage for the first time where he expected to struggle was the strict diet that bodybuilders follow.

“I’ve always been skinny and always had trouble putting on weight, so the main thing for me has been managing food intake, so I count everything I eat on a day when I’m training, and I’ve done that to track my progress gaining weight.

“The diet heading into the competition was quite hard, especially managing it with the treatments, but I didn’t find it that difficult because most of it is just calorie restriction. I would normally eat only a small amount of food each day if I didn’t force myself to eat.”

Walsh is sure to be on the end of some friendly ribbing from his schoolmates when he returns to Waicol next week, as he had kept the competition secret from them because he wasn’t sure they would believe him.

Walsh had considered competing at the Nabba national championships in Palmerston North at Labour Weekend but said his Year 13 NCEA exams take precedence. He plans to study law at university next year.

“One thing I don’t want is for my school marks to fail because that is one thing I’ve been working really hard at as well, and we have mock exams when we get back to school. Then straight after that, we have the actual exams.”

Regardless of if and when the once sickly underweight boy from Greytown, who has endured more than 300 hospital admissions over the course of his life, steps out on stage again, Walsh has already proved he is a true champion and an inspiration to many.