From the trenches to farm life Around 100 of William Bannister’s descendants returned to the property to celebrate it’s centenary. PHOTO/SUPPLIED

Westmere: 100 years of life on a returned soldier’s farm

William Bannister returned from fighting in Gallipoli broken and battered. Years later his service was recognised when he was alloted a 90-hectare section of farmland nestled between Gladstone and Wainuioru. GIANINA SCHWANECKE talks to Joe and Suzanne Bannister at the farm, Westmere, about the life of Joe’s grandfather.

William Masters Bannister was born in Opaki in 1890, the son of Henry and Mary Ann Bannister. 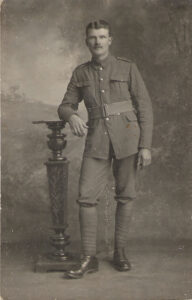 The 24-year-old was working as a cabinet maker with G Hyde and Co in Masterton when the Great War started in 1914.

He enlisted in August that year and was posted to the Wellington Infantry Battalion 19th Ruahine Company as a Private.

He fought at Gallipoli where he was injured after being buried in the collapse of a shrapnel proof shelter which had been struck by a shell burst.

He was left with a broken humerus [arm bone], broken shoulder and weak back.

After 653 days in service, he was honourably discharged as medically unfit.

William returned to Wairarapa in 1916 and in 1918 married Mary Grace Downes, who had been the bridesmaid at his sister’s wedding.

A year later, they settled on land allotted under the Discharged Soldiers Settlement Act 1915 which gave the Government authority to purchase land to provide cheap farms for returning soldiers, as well as supporting loans to finance the purchases.

The settlement scheme had two purposes; compensating returned soldiers for their lost time and wages and increasing settlement on existing large farms to increase food production for local consumption and exporting.

It is worth noting that returning Maori soldiers were left out of this scheme — the government at the time assumed Maori veterans had tribal land already available to them.

In Wairarapa, seven sections in the Westmere Estate — formerly part of Brancepeth Station — were allotted to returning soldiers.

A 90-hectare section with existing accommodation was drawn by William and his new bride, who was already pregnant with the first of their seven children.

Possession of these sections took place on March 28, 1919.

The Bannister family farm, Westmere, was expanded through purchases of surrounding farmland in 1927, 1954 and 1989.

William and Mary retired in 1954 [William died in 1976] with the property being purchased by son Edmund. In 1985 ‘Eddie’ and Noeline retired into Masterton, and their son Joe and wife Suzanne purchased the farm.

The hilly sheep and beef farm has been in the family for four generations now, with members of the immediate and extended family gathering at Westmere three weeks ago for a special centennial celebration

“It was a name in the ballot hat and then if lucky it was your farm to buy,” Joe said. “It was a foot in the door for him..

“I was born here. My old man and my grandad all farmed the original land.

His grandad never spoke of the war and what he had endured.

“[His children] had no idea growing up. They said they understood him better now.”

It was only when Joe and his wife Suzanne decided they wanted to attend the 100-year commemorative service at Gallipoli in 2015 that they began to learn more about William’s history. Joe Bannister admires the replica medals his grandfather was awarded in WWI – the 1914-15 Star, the British War Medal and the Victory Medal. PHOTO/GIANINA SCHWANECKE

Anzac Day had always been an important part of the calendar for the couple, as both of Joe’s grandfathers fought in the Wellington Battalion.

“We took the kids to Anzac services when they were little — the dawn services at the Masterton cenotaph,” Joe said, adding with a laugh, “Now we go to the Tinui service because it doesn’t start until ten o’clock.”

Suzanne said she was moved by their trip to Gallipoli in 2015.

“You think you won’t be affected by it, but you are.”

She started planning for the farm’s centenary a year after their return.

Three weeks ago, they hosted about 100 family members for a weekend celebration, with relatives coming from as far as England and Australia.

“We just did the immediate family of Bill [William] and Queenie [Mary Grace],” she said.

The reunion was rainbow themed to represent each branch of William and Mary’s seven children, with families encouraged to wear clothing in their branch’s representative colour — Joe and Suzanne’s was the green family.

“It was fantastic,” she said. “It was a really happy occasion.

“We became grandparents the day before [everyone arrived]. Our first grandchild, Sofia was born on March 28 exactly one hundred years after the farm was taken over.”

Joe said he hoped what his grandfather endured would never happen again.

“The men all thought it would be a big adventure. I don’t think they realised the consequences.

“There was a huge loss of life.”

For future generations who may still be on the farm in 100 years’ time, he’d say “good on you”.