From page turner to wood turner 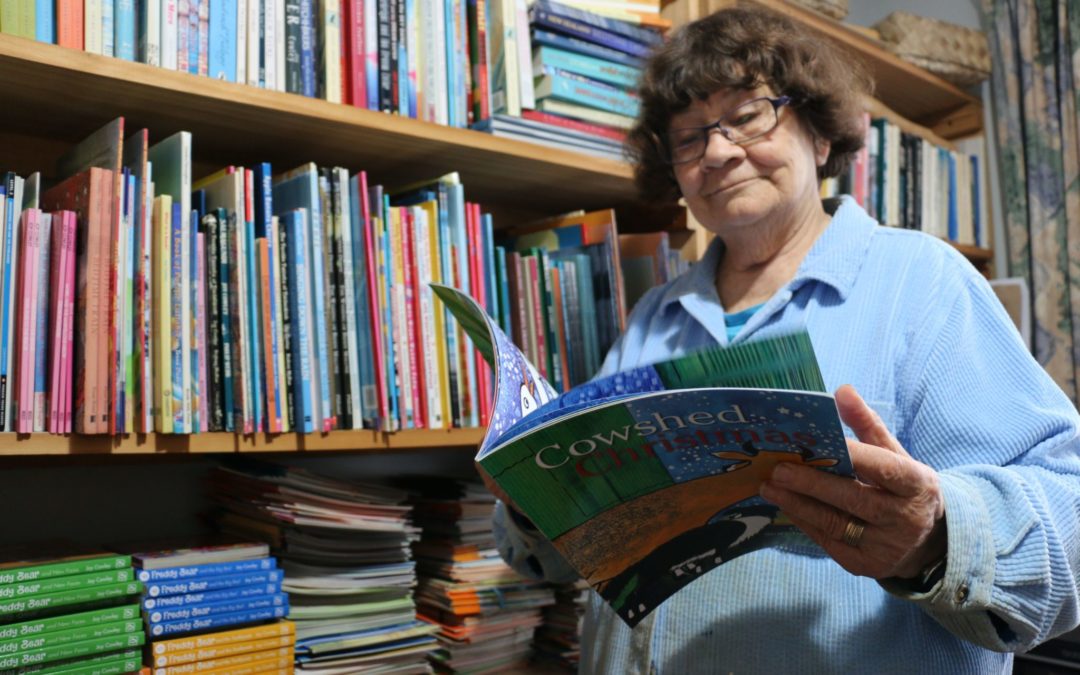 The wonderful world of Joy Cowley

A mother-of-four, a teacher of teachers, a writer of hundreds of books. Joy Cowley is full of surprises, as HAYLEY GASTMEIER discovers over an afternoon tea of wooden treats.

“And I like being ordinary,” she says, despite the fact that it would probably be more accurate to describe her as extraordinary, given her remarkable life, which includes receiving the highest honour in the country this week.

The 81-year-old lives in a humble house in a humble street in Featherston, with her husband Terry and the boss of the cottage, Madame, the cat.

But pieces of Joy are dotted throughout thousands of homes and schools in New Zealand, and around the world.

Known as one of this county’s most prolific writers, Joy is celebrated for her hundreds of books for adults and children, and for her notable work in education. 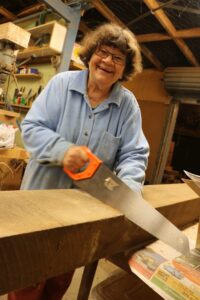 Author Joy Cowley in her Featherston workshop cutting through a beam of Matai which she will use to make bowls. PHOTOS/HAYLEY GASTMEIER

But moments after knocking at her door, the world lights up.

I’m greeted by a beaming smile on a woman who undoubtedly has an enormous heart.

She welcomes me inside and veers straight to the dining room table where her latest treasure lies tucked neatly inside a cushioned box.

It’s the medallion she was given at Government House on Monday, when she was made a member of The Order of New Zealand.

She says it’s been worn by artist Cliff Whiting and educationalist Clarence Beeby — and she’s clearly delighted by this.

Joy tells me she’s always been “addicted” to words, but her love for reading didn’t arrive until she was well into her teens.

“I had been in five schools by the time I was seven because my parents moved around a lot and it was war time – World War II.

“Classes were overcrowded and because many of the men were overseas, many of the young women had to work on the land – they were called land girls.

“Some of the older teachers in retirement had come out of retirement, so you would have a teacher in her sixties who had that number of children in her class, and some of the children got lost.

Our chat is side-tracked by a friend who pops round every now and then to use Joy’s lathe. Her lathe?

“I do wood turning,” she grins, and brushes past me to pick up a tiered afternoon tea platter with custard squares, savouries, and cucumber sandwiches.

“It’s all made of wood,” she says, “and the bacon in the pies are just wood shavings”. An afternoon tea platter made entirely of wood by Joy Cowley, alongside her first novel.

She sits back down on the red vinyl sofa and picks up where she left off.

“It was a passion of mine that children see themselves in the books they read, because when I was young I felt there was something very inferior about being a New Zealander because I was never in the books.”

Most books back then were based in an English landscape and “never [featured] bush and paddocks”.

This realisation took her around the globe, working for education ministries in Malaysia, South Africa, and Iceland, just to name a few countries.

In Singapore she recognised kids were being taught to read with books about “thatched cottages, donkeys and children who had boiled eggs for breakfast”.

“They were totally unsuitable.

“I said, ‘You need your own stories’, so that was the beginning of something that went on for about 20 years.”

With her book sales doing well, she funded her visits overseas to run writing workshops with mainly teachers.

Joy edited the material gathered during the sessions to craft simple stories, which were illustrated then published.

She says her “appetite for words” was realised when she was about nine.

“I still say to children, ‘Don’t you love juicy words’, and they all smile because they do too.”

The eldest of five children living in Foxton, Joy was pulled out of school at age 16 to help earn money for her family.

Her distress at this did not go unnoticed, with her principal at Palmerston North Girls’ High School arranging for her to take a job at the Manawatu Times, editing the children’s page.

“I just had great fun that year.”

She was then offered a journalism cadetship at the paper, in 1953, but her parents wouldn’t let her take it.

“I can remember my mother saying that ‘journalists were either communists or atheist and you’ve been too much under their influence’.”

Heartbroken, Joy followed her parents’ wishes and took the road to becoming a pharmacist.

However, aged 19, she met a “beautiful young farmer” named Ted.

“He didn’t want to marry me, he was not quite 20, but his mother made him marry me and we had these four beautiful children, quite rapidly, all within five years.

“He had a lot of girlfriends and he went out a lot, so that’s when my writing came back in, at home in the evenings when the babies were asleep . . . I started writing short stories and eventually got one published in the listener and then another.”

Joy was writing regularly by the 1960s.

When one of her short stories was reprinted in an American magazine, Joy received a letter from an editor.

“Well, when an American editor says do you have a novel you don’t say no.

“I said ‘I’m thinking about it’, and I thought about it for about two days then thought no, I can’t write a novel.

“Then about six months later back came a letter from her saying, ‘How’s that novel coming along?’.”

Joy sat down and penned the first chapter of Nest in a Falling Tree. 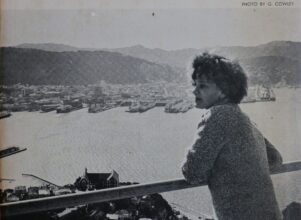 Joy Cowley, 31, looking over Wellington from Mt Victoria in a photo on the jacket of her first novel published in 1967. PHOTO/SUPPLIED

“That book got a half page review in the New York Sunday Times and somebody there compared it with a Mozart sonata.

“I thought that every book that got published this happened to it. I didn’t know that it was unusual, or even that to get published was unusual.”

Then Roald Dahl bought the film rights to the book, and adapted it into the 1971 film, The Night Digger.

“He turned a rather gentle story into a horrific murder mystery, but that didn’t matter too much for me because the money bought my property down in the Marlborough Sounds.”

I tell Joy about that time when I was one and sat on Dahl’s knee in England in 1987.

She’s amused, and recalls her own time spent with the “interesting man with an extraordinary mind” — his big swimming pool that he heated with home-made solar power technology, which simultaneously helped his orchards grow off the poolroom rooftop.

Joy went on to write hundreds of books, mainly for children, incorporating jokes and always a twist “to keep them reading to the end”.

She and Ted eventually divorced, and in the 1980s she had a big hand in overhauling the educational reading programme taught in Kiwi schools.

While she flicks through some of her favourite works, reading them aloud to me, I asked if she could sum up her writing career.

“I just think I’ve been an empty paper cup that’s been filled with good things.

“Sometimes the paper cup is dry, but it eventually gets filled up, with something.”

Before I leave she wants to fetch an item from her workshop.

On the way she points out her new black Mini Cooper sitting in the carport.

“Naught to 100 in less than 4 seconds. It’s amazing,” she says, adding that her son James just bought it for her 82nd birthday.

In her rather large shed are bits of machinery, tools, and a heck of a lot of wood from which she skilfully makes pieces that she gives away.

She gifts me a pen, made from yew wood, and a small bowl, which she says will be handy to keep my keys in so they don’t get lost.

“I tell people that my only qualification in life is a diploma in wood turning.”

Next to that certificate is a framed photograph of Joy bungy jumping in Central Otago on her 65th birthday.

I’ll be happy if I achieve in my life a fraction of what Joy has.

And her advice to writers?

“Tell it on paper as though you’re having a conversation with someone, because that is always the most interesting for a reader . . . direct communication, and it will come alive.” Joy Cowley, now a member of The Order of New Zealand, with her medallion.