From glamour and glitz to giving 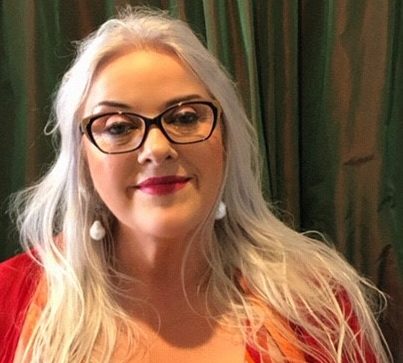 Gail Wilson calls herself an audacious figure, a very apt description for someone who has had an exciting, adventurous life, travelling and working – as a make-up and hair stylist – with some of the most well-known names in advertising, television and showbusiness.

Born and raised in Queenstown, her parents led by example, and Gail was always mindful of serving those less fortunate.

Based in Martinborough since 2003, her South Wairarapa Rotary award for ‘Pride of Workmanship and Community Service 2020’, was well deserved.

In nominating her, Pain and Kershaw owner Conor Kershaw called her an “unsung hero, constantly doing things for others in need and never seeking recognition or reward. One of life’s good human beings, always putting others ahead of herself.”

In 2019 she launched a cookbook – ’Tastes from Martinborough ’- to raise funds for a hospital care facility at Wharekaka Rest Home in Martinborough.

Working alongside a team of other volunteers to fundraise, whether it be for new kitchen equipment or staff uniforms for the rest home, Gail says, “our community has a family feel which I just love.”

She has offered therapy treatments to residents who have suffered a loss in their lives, and has served on the South Wairarapa District Council, working hard to benefit her community.

Feeling humbled by the award, Gail said it meant a lot to her.

“I feel you have an obligation to your community; you can’t just live in one, you need to be part of one. Say yes, and then think, how?”

Gail truly lives by the philosophy of giving back, helping those in need who are ill or grieving.

“I set up a small business and I got support from the locals and at times I drop my business to help others.”

Starting out as a young hairdressing apprentice in Queenstown, she worked her way into world cup hairdressing and then later, with make-up credentials to add to her list of talents, she joined the make-up department at Television New Zealand and TV3.

Being sought after as a freelance hair and make-up stylist for local and international commercials and music videos, short films, documentaries and feature length movies, led Gail to one of her greatest adventures – three years working alongside some of the most well-known names in Hollywood on Peter Jackon’s trilogy of movies, The Lord of the Rings.

As Gail describes it, “it was a six days-a-week, 22-hour days, seven units, seven trucks, two nannies and a lot of crew, plus a film to be made, in locations all over New Zealand.”

Her role was not just as a hair and make-up artist, it was part therapist, part counsellor and friend to the actors, taking away the stresses and strains of the day, helping them to prepare for the next gruelling round of filming.

You are inside your client’s personal space so you become very close, very fast.”

The locations were incredible and close friendships were forged in circumstances that were not all glamour, but could be trying and tiring, having to work late and solve problems, all to create a magical spectacle that still delights audiences all over the world today.

One of the highlights for Gail was getting married on the LOTR set of Rivendell, at Kaitoke Regional Park in Wellington, the day before it was dismantled.

For Gail, “people stand out because of their kindness.”

This is her way, being kind, she is loyal to the clients who support her Turret Salon & Spa in Martinborough, and makes sure that despite the lockdown, they have their hair and skincare products.

In turn they support her small business by paying it forward, buying gift vouchers for when the time comes that they may again frequent her beautiful salon and be pampered in relaxing surroundings.

For now, she says she plans to, “survive, shop local, laugh, be caring, give, work hard, stay timeless, trustworthy, be kind and continue to support her community”.