Friends of Onoke Spit call for extra manpower in conservation Friends of Onoke Spit are calling for volunteers to roll up their sleeves and lend a hand with conservation projects.

Onoke Spit is at the southern edge of Wairarapa Moana, one of the largest remaining wetland complexes in New Zealand, and has ecological values of national and international significance, organisers said.

“The Spit’s thin strip of earth cops it from all directions; swells roll in from Palliser Bay, roaring winds come down off the Remutaka Ranges and flooding from Lake Onoke. And of course, the actions of humans.”

Organisers said the hostile environment was home to a collection of hardy native plants and birds, some rare; Caspian terns, banded dotterels, katipo spider and spotted skink, even the occasional little blue penguin and Australasian Gannett could be found on the Spit. 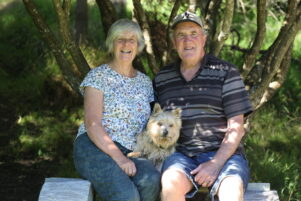 Denise and Dougal MacKenzie have been reviving Onoke Spit for over 10 years.

Despite its rugged terrain, for more than a decade, Dougal and Denise MacKenzie have dedicated themselves to reviving the Southern-most part of Wairarapa Moana.

Native and rare species survival is very much reliant on the efforts of people like the MacKenzies, which was a core reason for their establishment of the ‘Friends of Onoke Spit’ in 2010.

With an education background, Denise enlisted Kahutara and Pirinoa schools to help with some of the groundwork.

Kahutara School pupils have been involved in annual working-bee days for the past 10 years, weeding and mulching the plantings and putting new native plants in the ground.

After today’s weeding and management day, the group’s annual planting day will be on Wednesday, August 11.

For the rest of the year, the MacKenzies do the heavy lifting through a pest eradication programme, which includes about 60 predator traps out on the spit to help protect the birds, catching stoats, rats, hedgehogs, ferrets, and feral cats.

The MacKenzies also manage the fencing of areas high on the beach to discourage vehicles from drifting into the sensitive areas and destroying habitat and nesting sites.

The Friends of Onoke Spit are one of many groups driving conservation work at Wairarapa Moana.

In 2007, the Wairarapa Moana Wetlands Project was established, with the aim of enhancing the native ecology, recreational and cultural opportunities on public land in the area.