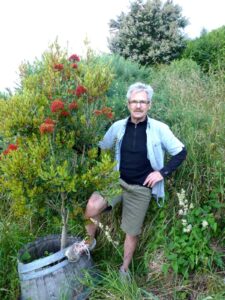 Forty years ago, when Clive Paton made the decision to buy five hectares of a barren, stony paddock just outside of Martinborough with the intention of planting it up in grapes, many would have raised their eyebrow.

However, the move has clearly paid off for the co-founder of Ata Rangi, one of Martinborough’s most well-known pinot noir producing vineyards.

Inspired by a scientific soil and climate report on the suitability of Martinborough for grape-growing, his sister soon joined and purchased a neighbouring 2ha block of land which was planted in pinot noir.

Paton was still on the lookout for something to satisfy his conservation interests though.

“In town, I was at the point where I was needing to chop down trees in order to plant trees. So, I began to search for a piece of land to cover with natives.”

The acquisition of the ‘bush block’, as it is now fondly known, began – like much else in Paton’s life – with grapes.

While viewing potential grape land with a real estate agent, he came across a piece of destroyed original bush, close to 120ha, up the back of the property.

“Straight away, I knew I wouldn’t find another piece of land like it so close to Martinborough.”

The bush block now boasts around 700,000 trees, most native varieties, with some others that are useful for sustainable management of Ata Rangi – rather than buying in treated fence posts, the vineyard uses ones from eucalyptus trees.

His favourite tree, however, is the mighty rata.

“A DOC [Department of Conservation] friend staying in the bush block hut for the weekend went up the ridge and discovered rata, which were thought to be totally extinct in the area.

“The Metrosideros family in New Zealand doesn’t have the resilience against possums of its Australian relatives.” Clive Paton partnered with The Project Crimson Trust to help propagate young rata trees to be planted in his beloved bush block.

After a summer visit, when the trees were flowering and being inundated by tui, he decided to propagate them and started planting through his own areas.

The Project Crimson Trust, initiated to protect the pohutukawa and rata, was a natural partner for Paton in this process.

“I’m not a scientist, but I know how to use science,” he said.

“The board from Project Crimson Trust came for a field day in about 2005, and I was so inspired by their work. I’ve never looked back.”

Some had gone on to become very good friends.

“It’s a similar camaraderie to what you find in the pinot industry.

“You have to be slightly crazy to be a pinot noir producer, and it links everybody.

“It’s the same in conservation. Once you know people are interested in the environment, you become friends pretty quickly.”

Paton’s beloved rata are also visible at the front of his at the cellar – “there’s always a pottle of baby rata on the table, and we’ve sold thousands from the wine shop over the years”.

He sees Ata Rangi as a platform to share some of his knowledge.

“We have a vehicle to have a bit of influence through Ata Rangi, with thousands of individual customers who’ve come across our love of rata and pohutukawa.

Ata Rangi favours small tasting groups over larger open days, which also allows him to tell the story of his conservation work to 20 or so guests as they enjoy Ata Rangi’s exquisite vintages.

The renowned wines include “Crimson”, a younger vine pinot noir named for the trust and sold in support of its work with its proceeds going towards its projects. 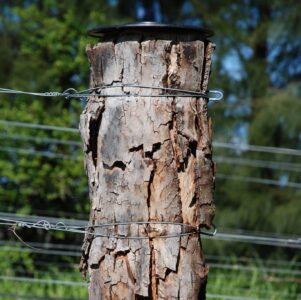 Rather than buying in treated fence posts, the vineyard uses ones from eucalyptus trees grown in the bush block.

His motivation for environmental conservation and improving biodiversity is a no-brainer.

“The work is wider than that, too: there’s a whole generation that’s reacting to what has happened to New Zealand’s flora and fauna.

“We’re not going to see the change in our lifetime, but we’re setting it up for our children and grandchildren to keep going.”

“We can never repair the damage done, but we can have a pretty good crack at making things a lot better: and at looking after what we have left.”

His work with the Pukaha to Kawakawa Alliance Group provides connectivity between groups such as the Department of Conservation and Greater Wellington Regional Council and works to secure funding for conservation work across the Wairarapa region.

Paton was also a founding member of the Aorangi Restoration Trust which looks after more than 40,000ha behind the beloved bush block and which stretches as far south as Cape Palliser.

The trust’s aim is to restore the Aorangi Forest and surrounding native wildlife by 2045.