For love of community and land Each week, the Wairarapa Midweek will profile one of Wairarapa’s political candidates. This week, LISA URBANI talks with Mike Butterick.

Mike Butterick, National Party candidate for Wairarapa, is proud of being a businessman and a farmer, “a custodian of our land” as he puts it, “we are here to improve the land and the environment”

Growing up on a farm in Ashburton, he said, “farming gets in your DNA, it was the best place as a kid, lots of space, working outdoors with dogs and animals, chopping firewood, trapping possums, mixing with different people, for me it was one giant playground”.

This is the lifestyle he has tried to replicate with his own family, his wife of 25 years, Rachel, and his four children who are now young adults.

“Farming is one of the few businesses where the whole family can get involved, it gives you a good grounding in life and teaches you about hard work, the job is done when it’s done.”

Coming to Wairarapa in 1990 with a South Island polo-crosse team to compete in the nationals in Taupo, Mike ended up getting a job at Wairere Station with highly-regarded sheep and beef farmer, Derek Daniell.

“I’m another graduate of the University of Wairere,” he joked.

He worked as a shepherd in various places including Wairoa where his wife Rachel had her first placement as a police officer. 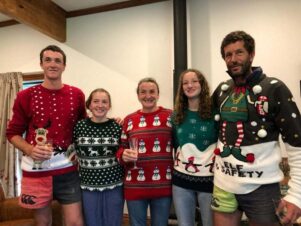 The Butterick family in their festive gear, Jack, Emma, Rachel, Charlotte, and Mike [daughter Annabel was not present]. PHOTO/SUPPLIED

By 1995, they were married and bought Rocky Hills, in the Te Wharau area, a tough steep hill country farm of about 2260 hectares, and 11,000 stock units, which they eventually sold in 2016, after trying to sell
it for six years.


Mike tried to get the farm turned into a national park with a feasibility study by the Greater Wellington Regional Council, but despite 132 hectares being in a QEll covenant, and it being declared ‘nationally significant’ by the Department of Conservation – and in the top three projects under consideration for the Native Forest restoration Trust– this was not to be, and it was bought for forestry conversion.

Previously he was the spokesman for the ‘50 Shades of Green’ movement which aims to limit the number of trees being planted on good productive land, and he is open about this perceived contradiction, saying, “it really was a case of right place, right tree”.

Feeling that the government policies around tree planting were wrong, he wanted to help change the conversation and make a difference by standing up and tackling the issues with reason and logic.

The family now farms at Manaia Rd, and all his children are adept at farming, with multiple skills, and good work ethics, being able to hunt and fence and use a handpiece for shearing.

He has always followed politics and says, “it has the greatest influence on how you live your life day to day”.

Feeling humbled when he was asked to stand, he agreed because he believes you can “have a greater influence inside the tent”.

Listening, being approachable and getting things done – even though it might be a slow process at times – is what he is aiming for.

Having “lived and breathed provincial New Zealand” all his life, Mike felt strongly, that he wanted to contribute to his community.

Family comes first, “I have been very lucky with my wife and kids and couldn’t ask for much more,” but even so, life hasn’t always been easy for him, he has had his difficulties, but says, “that builds resilience,” and he knows that “hard work brings rewards”.

“Nothing is ever handed to you – you’ve got to get skills, find opportunities, work hard, it isn’t easy, life is about challenging yourself and taking calculated risks.”

As a mentor, he credits his father, who passed away last year, with being his role model and showing him the importance of being a “people person”.

“It was never about him – he was completely unselfish,” he said.

Farming is his ‘hobby’, but when he has downtime, he admits to having a love for reading just about anything.

Mainly, he feels he is fortunate to have lived the life he has, and is privileged to do a job he loves, in a spectacular environment.