Scoops Cafe and Ice Cream owner Shayne Tyack is among the first Masterton business owners to take up the Delivereasy service. PHOTO/FILE

Masterton and Carterton residents are about to enjoy a level of convenience previously reserved for city-dwellers.

Wellington-based food delivery business Delivereasy is expanding into Wairarapa today. With 22 Masterton restaurants, cafes, and stores already on board, residents will soon find a range of food options at their fingertips.

McDonalds, Noodle Canteen, and Subway were among the first to sign up for the service, alongside cafes Strada and Scoops.

“It’s bringing something to Masterton that has been much needed,” Scoops Cafe and Ice Cream owner Shayne Tyack said.

He said the app-based delivery service would open up another source of revenue for his business.

“Especially in these days, we’ve got to look at other ways to make money for our businesses. We’ve got to start thinking, and I think that this is one of the ways that businesses can jump on board.”

Tyack said cities had already benefited from services such as Delivereasy and Uber Eats for some time.

“We’re a bit behind but it’s better now than never,” he said. 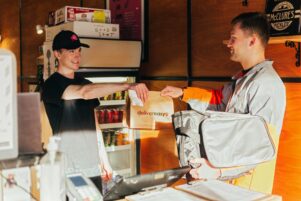 Delivereasy has already signed up 18 drivers for its Masterton service. PHOTO/SUPPLIED

He said Delivereasy made the process very simple for businesses, even providing them with a tablet to process their orders.

“We accept the order, we make the order, a driver comes and picks it up, and off it goes,” Tyack said.

Masterton area co-ordinator Louis Berzins said launching on a Wednesday would give delivery drivers some time to get their heads around the service before the weekend rush.

About 18 drivers had already joined the team.

“It works out particularly well for students, people looking for a bit more work over summer, and a lot of people who are looking for secondary income,” Berzins said.

“The biggest drawcard is the flexibility. Drivers can work three hours in a week, or 40 hours – it’s up to them.”

He said drivers could earn from $25 to $30 an hour depending on the number and distance of deliveries.

Deliveries to Carterton, for example, would pay more than those within Masterton.

Delivereasy launched in Wellington in May 2016. Since then, it had expanded to about 25 other locations, including Auckland and Christchurch. Closer to home, the company had launched in Lower and Upper Hutt and the Kapiti Coast.

Berzins said Delivereasy’s positive experience in Upper Hutt had been a driver for its expansion to Masterton.

“Upper Hutt is disproportionately busy, per capita. It’s a pretty similar demographic and population size, so we thought [Masterton] was a logical step up that way.”

He said partners such as McDonald’s helped to push a lot of orders through, but small local businesses also typically contributed to about half the total orders.

“Since covid, we’ve realised that we’ve been pretty viable in some of the more rural towns of New Zealand. Blenheim, Kapiti, Timaru, and others, have all had very positive and popular responses. But particularly in Masterton, the engagement from restaurants has been very strong, which is a great sign.”

The delivery service would extend from Masterton to the outer limits of Te Ore Ore, Upper Plain, and Homebush, while the Carterton localities of Carrington, Clareville, and Parkvale would also be covered.