There’s a quiet order to the seemingly untamed wildness of food forest gardens.

Combining fruit and nut trees, shrubs, herbs, vines and perennial vegetables together in one, food forests make for more sustainable and resilient communities and are increasingly popular around Wairarapa.

For Ali and Garry Foster, starting a food forest was the natural path to follow after a life spent outdoors and in the environment.

The couple moved to their plot of land in Matahiwi, west of Masterton, about 30 years ago.

It included the original Matahiwi schoolhouse which closed in 1982.

They built an extension and started by planting native trees to increase biodiversity and provide a shelter belt to combat strong winds.

In February, Garry retired from the Department of Conservation where he had worked for close to 40 years, giving him more time to spend outdoors in the food forest he established five years ago.

“Most people plant their garden and then build their home,” he said, before adding with a laugh, “We didn’t do it that way around.”

His years in the bush helped him to learn more about gardening and natural processes which influence food production.

“Working for DOC I spent a lot of time in the environment,” he said.

“Layering is one of nature’s patterns. Permaculture looks at imitating that approach.” Foster’s food forest is also home to several chickens who help make compost to be used in the garden.

Most food forests comprise of about seven layers – a canopy layer made from tall fruit trees, a lower layer of dwarf fruit trees, a shrub layer of berries, a herbaceous level of culinary, medicinal and companion plants, a ground cover of edible plants which act as living mulch, a layer of root crops and a vertical layer of climbers and vines.

Bees and other insects also play an important role.

He said it was important to plant a range of species and everything was useful – be it for food production, medicinal planting, soil conditioning or support species to help others thrive.

“In nature diversity is strength. The native trees work really well as a shelter and housing for insects and birds.”

Foster avoids planting in rows and preferred to plant annuals in three-metre clumps or circles, letting nature guide him where plants seemed to thrive.

“Nature doesn’t do things in rows,” he said.

Setting up wasn’t without its challenges though, and they struggled with soil quality initially.

“There was no topsoil here. It was just a brown river silt, so we totally started from scratch.”

He said their property was also exposed to stronger winds and had a slightly higher rainfall average than those living in Masterton might experience.

A pivotal part of their operation was using mulch to improve soil quality and provide a moderating layer, keeping temperatures and levels of water retention more consistent.

“I consider our main job here is looking after the soil microorganisms. Soil is a living organism.”

He grows many of his own plants from seeds sourced from Koanga Gardens in Wairoa, northern Hawke’s Bay, which specialises in heritage and New Zealand plant varieties.

The seedlings are transferred to a greenhouse, then left to harden up outside before being planted in the garden.

“People talk about the community’s food evolving with their climate.

“Over multiple generations [the plants] adapt to the soil and climate – they become very localised.”

This had led to Foster learning new skills such as seed saving.

He’d also had to learn better food preparation and storage practices to prevent wasting what their garden created.

The one-hectare food forest comfortably feeds the couple, as well as family and friends.

“I like to imagine one day it will be like a Garden of Eden and we can throw out the cutlery and plates – if we’re hungry we’ll just go out into the garden,” he said.

He said it was important that communities relearn these skills to become more resilient to challenges like climate change.

“Our communities used to now and hold this information. We need to relearn it.

“[Food forests are] something which can be scaled up or down.”

It’s a sentiment which resonates strongly with Tinui couple Deb and Ray Butterfield. 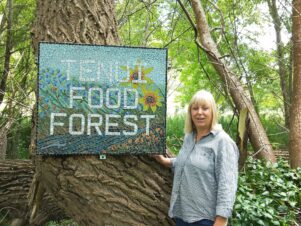 Deb Butterfield at home in her Tinui food forest.

They’ve spent close to 20 years working on a food forest of their own on a ten-hectare block of grazing land just outside of Tinui.

“I’ve always had a green thumb, ever since starting my first herb garden with my grandfather.

“I’ve always loved being outside and growing things.”

They started their food forest by claiming a one-hectare piece of land which borders a stream.

Working with more fertile soil, their main challenge was competing with grass growth.

“Our main challenge was establishing the forest canopy — until we did, the grass just tried to dominate everything,” she said.

Finding the funds to purchase plants was also challenging, she said.

“We had very limited funds. We could afford some fruit trees, mostly heritage varieties sourced from Koanga Gardens.”

She used cuttings of black current bushes, rosemary and elderflower to help set up garden boundaries.

“Everything else had to be added in as funds and time permitted.”

She had just started a new 0.8-hectare patch where she hoped to grow produce for making syrups, cordials and other pantry goods which she could sell.

The farm is also home to goats, chooks, ducks and a few pet pigs, leftover from their free-range pork business.

“We use no sprays or other inputs. The whole food forest supports itself and healthy growth is everywhere.”

Feeding the birds and insects which frequent her garden was also a big part of the project.

“It’s not about us, it’s about the environment we create,” she said. “Our food forest is for the birds, bees, other insects and then us.”