Flying into the future The Wings Over Wairarapa Community Trust has elected Ron Mark as its new board chairman. PHOTOS/SUPPLIED 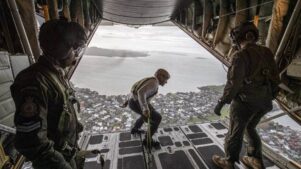 Wings Over Wairarapa has elected former defence minister and Carterton mayor Ron Mark as chairman of the community trust’s board.

“Without Bob’s dedication and guidance, I doubt very much if the event would have survived a full weather cancellation in 2017, a partial one in 2019, and then a covid-affected event in 2021,” Mark said.

“It’s an honour to have the opportunity to drive Wings into the future and take advantage of the current national and international opportunities.”

The new team had spent the past few weeks looking at what could be done to grow the event, Mark said.

“The success of the STEM Aviation and Education Programme has shown what we can do if we diversify, and there is scope to extend and develop this for the future to showcase what the aviation sector offers in the way of exports, careers, and workforce opportunities.

“Having worked myself as a Wings over Wairarapa volunteer for many years, I also understand the significant contribution our region’s volunteers make to this event and their importance to its future.

“The future is hugely exciting, and we have a very experienced board of trustees and management team.”

Mark was also excited to work with Masterton District Council to understand its strategic vision for the event.

The trust was proud to have run a “highly successful” event earlier this year, despite the uncertainty brought by covid-19.

About 5000 children, teachers, and parents had attended the school STEM programme, and thousands had packed Hood Aerodrome to see the USA’s B52 and the Australian C130J, in particular.

The next Wings Over Wairarapa air festival will be held from February 24-26, 2023.