Heidi Holbrook at home amongst rows of dahlias. PHOTO/LUCIA ZANMONTI

There are bees buzzing, birds singing, a colorful blend of heirloom flowers and plenty of food on the Holbrook family’s block in Carterton.

Heidi and her husband Rupert have always loved gardening.

While Rupert studied horticulture at high school, Heidi said she had always had a green thumb but no formal qualifications.

“It was the same in all the flats I lived in too. I was the one who had all the pot plants.”

After directing the Kokomai Festival for six years, she was looking for a change in occupation when she decided to establish the flower farm and food forest.

“It’s a regenerative way of gardening. It’s the growing that I love — having the vision and building it.”

They settled on sheep and dairy farmland which was originally part of Carterton’s Carrington Estate.

“For years it had been sprayed with herbicides and pesticides. We were taking a bit of degraded land and rebuilding the soil fertility.

“We did soil tests but didn’t have much knowledge. The challenge was learning as we were going,” she said.

Holbrook said it was hard to know where to begin starting with a blank canvas, however, she knew she eventually wanted to grow a food forest and flower farm.

So, they started by planting around 1200 natives around their border to create a micro climate and provide wind shelter.

“We are very exposed here, so we wanted to get the shelter belt established quickly,” she said.

The garden is watered using a drip-irrigation system on a timer, using water sourced from the farm’s bore.

She’s just finished her first season on the flower farm. 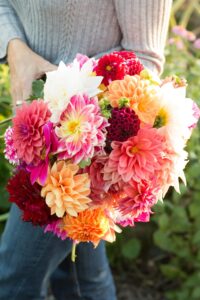 Flowers are sold directly to florists, as well as being sold for weddings and bouquet subscriptions. PHOTO/LUCIA ZANMONTI

Holbrook wanted to plant a variety of heirloom country flowers.

“At the moment we do edible and perennial flowers.

“I’m learning what does well, what are their companion plants.”

The flower farm makes up just a portion of the Holbrook’s operations.

“We’ve got herbs and vegetables and fruit trees.

“They’re forming an ecosystem which works together.,” she said.

The flowers attract a range of insects, including bees and other pollinators, which help with managing their food forest.

This type of agroforestry mimics natural ecosystems and uses the space available in a sustainable way.

Most food forests comprise of about seven layers; a canopy layer made from tall fruit trees, a lower layer of dwarf fruit trees, a shrub layer of berries, a herbaceous level of culinary, medicinal and companion plants, a ground cover of edible plants which act as living mulch, a layer of root crops and vertical layer of climbers and vines.

“We’re doing a lot of underplanting,” she said.

Food forests are growing in popularity around New Zealand.

This week Holbrook will head to Invercargill for a permaculture hui at a Riverton food forest.

Filmmaker James Cameron and his wife Suzy are working towards establishing a food forest as part of their organic South Wairarapa farming operation.

She said it was a myth that organic growing was difficult.

“You just have to change the way you think.”

Holbrook uses organic Lucerne and ground coffee beans as mulch to help protect the plants from drying out.

She said there’s a lovely smell of chocolate in the garden tunnels where they grow _.

“There needs to be more training for people to learn how to convert land to organic production.

“[Producers] are starting to diversify.”

Growing organic produce and flowers was just one of the ways the horticulture and flower growing industry had changed, she said.

“There has been a shift. It’s usually been quite ‘mono’ and done in a controlled environment.

“You can still have a formal structure with a food forest but have that within the ecosystem it creates.”

While Rupert still commutes to Wellington for work, running the flower farm has become her full-time job.

Holbrook has big plans for the future.

“I don’t think I’ll ever outgrow this property,” she laughed. 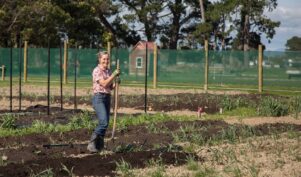 Setting up the food forest and flower farm was a labour of love. PHOTO/LUCIA ZANMONTI

Last November they brought in their first pair of WOOFers [workers on organic farms] to help.

She hopes to integrate the flower farm with the food forest in a permaculture style.

Her vision includes plans for a glass house restaurant, boutique accommodation and a natural swimming pond which will help irrigate the property.

“The garden will look so different next year.”