Flooding along SH2 in Featherston after Donald’s Creek breached its banks in February. PHOTOS/FILE

The 90-minute interactive meeting was also live-streamed on the Featherston Flooding Facebook page and had many people airing grievances on what they deemed a long-ignored issue.

Widespread surface flooding also caused chaos in the town, with raw sewage flowing in the streets.

One couple living south of Featherston near the Donald’s Creek boundary said their house was still uninhabitable after the February floods.

“The water was 14mm above the skirting.”

They said parts of the property were under more than a metre of water.

Problems highlighted at Donald’s Creek included a lack of waterway maintenance, insufficient and outdated infrastructure, and a regional and district council that disagreed on responsibilities. 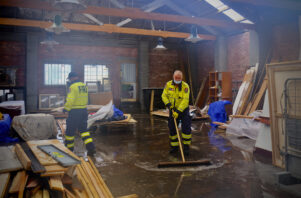 Meeting organisers David Famularo and Martin Connelly said they were pleased with the turnout and looked forward to setting up a committee similar to Greytown and Carterton’s Waiohine Action Group to lobby for change.

Famularo, who lived along SH2, said a large-scale flood in the late 1990s spurred the regional council to look at solutions to Donald’s Creek.

“They had two choices. One included making the culvert under Fitzherbert St bigger.

“The other was to build the embankment on Harrison St East to channel the water into the creek.”

“They were only expecting floods to be a problem once every 50 years.

“[But] there is too much water in the creek flowing through the culvert, and it ends up flooding the properties.”

He said options needed to be explored that did not shift the problem from one house to another.

His possible solutions included a second receiving channel or detention dams to moderate the flow rate coming from the catchment.

Connelly said the meeting highlighted the need for political action and an on-the-ground response network.

“We need to get that political awareness and lobbying to councils going, but also, how prepared would we be if the same event happened in a month’s time? How will we support our neighbours?”