Flash and dash at Featherston 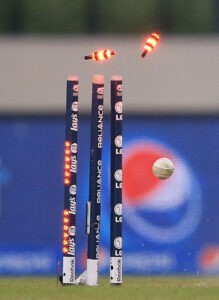 Indian Premier League-style LED stumps, and a record 12 teams are set to light up the second Mr Sold Featherston Cup to be played at Featherston over the next two weekends.

The Zing stumps, which repeatedly flash when the bails are dislodged, have only previously been used in New Zealand in the 2015 World Cup, and the T20 Super Smash.

The set of stumps are worth more than $3000 and being hired by organisers for the tournament.

A talented, experienced Skulls side will start one of the favourites for the four-day tournament, with 10 past or current Wairarapa representatives in their ranks.

Among them are Black Caps seam bowler Seth Rance, and Stefan Hook, who made his first-class debut for Central Districts in March 2020.

Skulls were runners-up in the inaugural tournament in 2019, beaten by the Sri Lankan Sports Club from Wellington in the final.

The two teams meet in a mouth-watering opening round clash on Saturday.

Interest has been high for the tournament, with 12 teams signing up, double the size of last year’s competition.

Nine of the teams are travelling from the Hutt Valley and Wellington, while Featherston and the Lost Boys are two other Wairarapa teams entered.

The first two groups will be played this weekend, with the third group to be played on Saturday, October 3, and the semifinals and final on the following day.

All the games will consist of 15 overs a side and special hard tennis balls, imported from India, will be used.

Each bowler can bowl a maximum of three overs. Batting and wicketkeeping pads are not allowed.

If a pool game finishes in a tie, the points will be shared by the two teams.

In the semifinals and the final, a super over will be played if the scores are tied.

There are also prizes for the best teams in each of the round-robin groups as well as one-handed catch-a-six prizes for spectators.

The Featherston Cup has been a boon for the Featherston Cricket Club, which reformed last year after 25 years missing from the Wairarapa Cricket scene.

The club is hoping to field an adult T20 side and several junior sides in the upcoming season’s competitions.