Fitness goes under the gun for season opener Dalefield coach Michael O’Connor is not entirely sure what to expect when his team take to the artificial turf at Clareville today for their opening game of the Wellington Women’s Premier League.

The Wairarapa-based side have drawn defending champions Harbour City, and O’Connor said the outcome could come down to fitness.

“We have only had two team trainings since lockdown has been eased so it will be a bit off a test for everyone, especially on the fitness side of things,” he said.

“On paper, the team is certainly looking like it will be a competitive and strong side. There’s plenty of youth and experience and strong players in every position.”

Most of last year’s squad have returned for the season, with the addition of some class acquisitions. 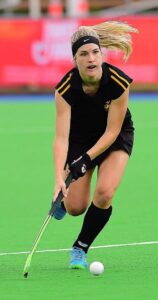 Former Black Sticks striker Felicity Reidy will come up against her old club after having returned to her home region from Wellington where she has been based for the past few seasons.

The ex-Wairarapa College student is a class act, having made her international debut in 2016 and having more than 50 NHL games experience with the Capital Cobras.

She was hugely influential in Harbour City’s charge to the championship title last year and brings pace and scoring nous to the attack.

Also new to Dalefield are former St Matthew’s Collegiate player Jamie Hicks-Wilton, and Amy Johnson, who are travelling from Palmerston North to play for the side.

The skilful midfielder-striker Jenna Anderson had limited game time last season but has since moved back to Masterton for her work at Wairarapa Hospital.

Although they’ll have to work around Anderson’s roster, O’Connor said she adds to Dalefield’s attacking prowess with her pace and ability to beat a player.

Morgan Percy is also a welcome addition after missing last season to have a baby, while Brigette Mossman is clear of injuries that dogged her 2019 season.

In a move to build for the future, last season’s captain Katherine van Woerkom will assist O’Connor with the coaching.

That will have O’Connor’s daughter Michael taking the captaincy role.