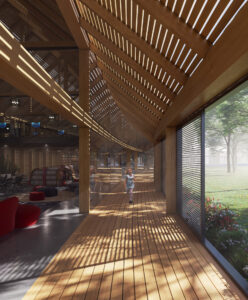 New images showing what Masterton’s future civic facility could look like have just been made public.

After approval, the document would be audited by Audit New Zealand before being provided to the community for consultation in April.

Mayor Lyn Patterson said the artist’s impressions showcased the culture and history of the district.

“These are not designs – that process hasn’t started. These images show the kind of space we think the community needs, and we think they paint an exciting picture of what is possible,” Patterson said.

“We are looking forward to as much feedback as possible from the community when the long-term plan consultation takes place in April.”

The new facility would be “alive” with activity, she said, with theatre and meeting places, exhibition space, the Masterton Library and archives, and some front-desk council services.

“We want to highlight the intended range of activity that is proposed for what’s been called ‘the community’s living room’,” Patterson said.

“It really is intended to be a place where everyone is welcome, and there is something for everyone. It is a once-in-a-lifetime opportunity to create a place that our tamariki and mokopuna can be proud of long into the future.”

Including the library and archive would help create a central community space for recreational and learning opportunities, she said.

It would also allow the council to resolve several issues, including congestion in the present library and the lack of a secure long-term space for the archives.

The new facility would provide an expanded library with modern technology and space where community members could connect.

While it was understandable people would want to know the site for the facility, Patterson said it “just hasn’t been finalised”.

“We said in August last year we were looking at possible sites, and that process is continuing – we can’t talk about it because of the need to maintain confidentiality in any commercial arrangements that are necessary.”

Plans to build the new facility were part of the council’s last annual plan. The estimated cost for the project was $30.8 million.

Members of the public would be able to provide feedback during the long-term plan consultation in April. One of the topics up for consultation would be about the amount of external funding the council should seek to arrange.

Along with the civic facility, other major projects included in the consultation document were a proposal to build 25 pensioner housing units at the council’s Panama Village site, and a 10-year plan to revamp Masterton – which included Queen St, the town’s welcome signs, and the development of a Waipoua River precinct.

The Masterton revamp project was estimated to cost $35.4 million over 10 years. Funding needed from rates revenue amounted to an average increase of 5.3 per cent each year.

Public consultation would seek feedback on whether to proceed with the full programme of work or to reduce the scale of the project.