While the days of the traditional grocer might be a distant memory, there was a time when such enterprises were very much the heart and soul of a community.

Muir’s The Quality Grocers was every bit this type of store with a customer base that stretched far and wide.

It wasn’t just the produce of the Lansdowne grocer that was drawing people in, but the five star service.

Proprietor, the late Jim Muir, prided himself on looking after his customers. Even when his ailing health prevented him from carrying the groceries out to the car of a loyal customer, he found a way to improvise, remembers his widow, Kitty.

“For a while he was known as the ‘push-chair man’, because he became so weak from his illness he couldn’t carry much and instead used an old push-chair,” Mrs Muir recalls.

He and his wife had brought the business, on the corner of Cooper and First Streets in Lansdowne, 23 years earlier.

Destroyed by fire in the mid-1980s the site was rebuilt on and is today home to the popular Dish Cafe. The street frontage is a far cry from what lay there some 30 years ago.

A wide paved footpath with room for outdoor sitting now marks the entrance to the building. It is all part of the $400,000 Lansdowne Shopping Village redevelopment project aimed at breathing new life into Masterton’s northern most shopping precinct. Features include off-street upgrades, car parks, paved footpaths, a green space and street furniture. In addition, power cabling has been taken underground. 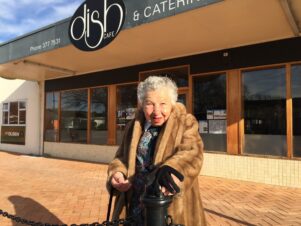 An official opening for the project is set down for Saturday 15 October. Among the special invited guests is Kitty Muir.

Recently she had a peek at the new-look street and was most impressed.

Mrs Muir says being a grocer was in her husband’s blood having worked in the industry since he was a boy. Both from Wellington, the Muirs owned a grocery in Hataitai before relocating to Masterton in the late 1960s, buying the First Street store. The business included several buildings on the corner block with a five-bedroom house attached to accommodate their four children.

Lansdowne was a wonderful area to raise a young family and she has fond memories of her time there.

Jim was very much the front of house man. Hard working and well organised he packed a lot into the shop, she says. But it was his good nature and willingness to please that kept the customers coming back. Muir’s The Quality Grocers was the preferred choice of grocers for many rural folk east of Masterton, according to Mrs Muir.

“I think a lot of people used to like coming in just to see Jim,” she says.

His brother Colin also worked in the shop. Longtime Oxford Street resident, Vin Gough, says the pair were a “couple of real characters”.

Jim was a stickler for dress code and every Friday would raise the standard by wearing a bowtie. Mrs Muir says it wasn’t uncommon for her husband to have a dance with some of the customers as he helped them with their groceries out to their car.

“I suppose some of the things he did were a bit gimmicky, but he just loved the interaction with the customers,” she says.

With two primary schools nearby – Totora Drive and Lansdowne (both now closed) – there were many young families in the area. Jim wasn’t going to let an opportunity pass him by and every year would have a resident Father Christmas, his father-in-law Dave Harris, out the front in the lead-up to December 25th. Surely this alone was enough to make it the best grocer in town?

When Jim was diagnosed with his debilitating illness in 1978 he kept up appearances for as long as he could. Following his death Mrs Muir did her best to carry on running the business, but it had taken a toll on her health too and she sold it in 1982. A few years later the building was destroyed by fire.

The site was rebuilt on, and the space that the shop occupied is now home to Dish Cafe, run by the Hannam sisters – Margaret, Pam and Vicky – who when growing up used to shop at Muir’s The Quality Grocers with their mum.