Firefighter rises to the challenge Volunteer firefighter Steffen Bertram will be running up the Sky Tower to raise money and awareness for Leukaemia and Blood Cancer NZ. PHOTO/JOHN LAZO-RON

Steffen Bertram is used to scaling heights as a volunteer firefighter. But on May 22, he will take that up a level when he tackles the Firefighter Sky Tower challenge in Auckland, JOHN LAZO-RON writes. 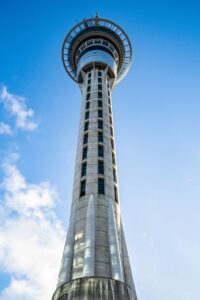 The Carterton volunteer firefighter ran up the 328m high Sky Tower in November, in full firefighter kit in just 16 minutes.

When he got to the top, he almost passed out after carrying 25kg worth of fireman gear on his back, including an air cylinder, while inhaling through a breathing apparatus.

He did the challenge to raise money and awareness for Leukaemia and Blood Cancer NZ.

But despite going through intense pain with the high-level run, Bertram’s about to do it all over again.

“If I can do some awareness or make some money to make lives better or prevent things in the future, then every second I spend on it is worth it,” Bertram said.

“It’s for a good cause, and I’ve got a good friend battling blood cancer at the moment, so it makes it more at home for me.

“Last year it was 16 minutes of pain. It was one of the hardest things I’ve ever done.

“I pretty much fainted when I got to the top as I nearly sucked the whole tank dry.

“But I’ll give it everything again. Hopefully, I’ll have more oxygen left over this time.”

Weighing in at more than 90kg, Bertram will carry more than 115kg in weight with his gear while running up the tower. However, his goal was still to make it to the top faster than his previous attempt.

“I’m hoping I can do it slightly quicker this time,” he said.

“In the gym I could do 100 floors with no pain. But when I did the challenge last year, I was only six floors in, and my legs were hurting.”

To better prepare himself this time round, Bertram told Midweek he was running up the stair climber at the gym with the exact weight he’ll have on during the challenge.

“I’m making sure I’m [training] this year with the extra weight on,” he said.

“I do half-hour bursts on it till the legs start shaking. That’ll be difference for me getting up faster this time.”

Bertram has a target of $1500 for Leukaemia and Blood Cancer NZ this year.

He said most of the money had been raised by the Carterton community, including Page 42 Café on High St, who pledged a dollar [up to $500] for every dollar their customers gave, which was recently met and matched.

Page 42 owner Josh Coe said the challenge was a great opportunity to help out someone in the community, which was what they were all about.

“It was a good cause, we like to get behind good causes, and the town has gotten right behind [Bertram], which has been amazing.”

Bertram won’t be the only firefighter from Wairarapa attempting the Sky Tower challenge, with eight members of the Featherston Fire Brigade also taking on the tower.

It will be the first time the Featherston brigade has attempted the challenge with senior firefighter Niamh McNamara saying it was a way to give back to Leukaemia and Blood Cancer NZ.

“Many of the brigade here have had some connection with Leukaemia and Blood Cancer NZ,” she said.

“So, we know how wonderful and important that their work is so this is a really good thing for us to do.

“It also improves our fitness and it’s team building as well so there’s a lot of different influences.”

The target currently stands at $8500.

The Firefighter Sky Tower challenge is on Saturday, May 22.