“I love Jennifer Eccles”, and Christine Rowe and Roger Hoar certainly do after the filly they have a share in won the New Zealand Oaks on Saturday. 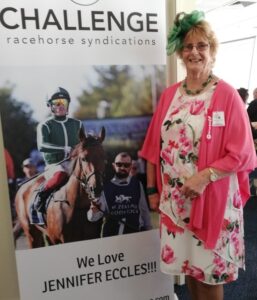 Rowe, from Carterton, said she was still on ‘cloud nine’ after Jennifer Eccles raced away with New Zealand’s richest race for three-year-old fillies, worth $400,000.

“It’s something huge to be part of. A lot of syndicates never do anything like this and to be in with a horse like Jennifer Eccles is just out of this world,” she said on Monday.

“I’ve only got a very minor one per cent, but it doesn’t matter, and it’s really great for Adrian Clark, who has worked hard to put the syndicates together.”

Rowe has been involved with Clark’s since he initiated the Challenge Syndicates.

“I’ve only missed the one syndicate and I’ve had 30 wins from eight syndicates up until now,” Rowe said.

“Adrian makes the syndicates affordable for anyone. I’m only a pensioner and I just love being involved.”

Rowe said part of the fun of being in the syndicate was travelling to watch Jennifer Eccles race.

“I missed her first win on Boxing Day, but I go as much as I can. There are 57 paying members and they fly in from all over the country. There were 95 people at Trentham.” 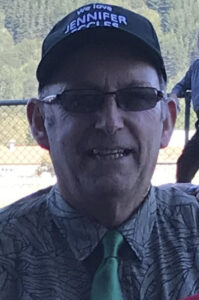 Jennifer Eccles’ win wasn’t the only thrill for Masterton stonemason Roger Hoar, who along with his son Geoff, is in the syndicate that races Wentwood Grange Cuddle Stakes winner Tinkalicious.

Trained at New Plymouth by Janelle Miller, Tinkalicious went to the front from a wide draw and held on to win by more than a length at odds of almost 20-1.

“It was unbelievable, you couldn’t dream about a day like that,” Hoar said.

“Tinkalicious was very well, she was ridden by Johnathan Parkes, she fights like anything and loves Trentham. I’m just thrilled for Janelle, who’s a one-person operation, and for her to get a stakes winner is great for her. She drove the truck down by herself and drove it home again on Saturday.”

On Jennifer Eccles’ win, Hoar said it came as almost a relief.

“There was so much hinging on it. I’m so pleased for [trainer] Shaune Ritchie, Adrian Clark, and [jockey] Jason Waddell, who had never won the Oaks before. It’s a dream come true.”

The foibles of racing though came back to bite the Number 10 Syndicate that races Jennifer Eccles on Sunday.

The syndicate’s other three-year-old filly, Cinzento, threw her rider shortly after the start in the last race at Woodville.