John Bissell with his dog Katy who has been trained to hunt out mustelids. PHOTOS/SUPPLIED

Mustelids and feral cats are on the rise and trapper John Bissell is out to get them.

Trapping had to stop during the covid-19 lockdown in late March. But in and around the Pukaha Mt Bruce Reserve, until lockdown, 33 ferrets, 26 stoats, one weasel and 35 feral cats had been caught this year.

In the first week of May, five dead kiwi were discovered in the reserve. These were kiwi hatched and raised by the Pukaha team. One more dead, traceable kiwi has been found since bringing the total so far to six killed during lockdown.

Only one kiwi was killed by a predator in 2019.

“It’s a war,” Bissell said. “When I get a report or notification of a ferret or feral cat, I will hunt it until I get it.”

Bissell, runs Backblocks Environmental Management Ltd, and is contracted to Pukaha Mt Bruce as the main predator manager. He has more than 20 years’ experience hunting down predators for the protection of New Zealand wildlife.

But for him and the wider trapping team, the covid-19 Level 4 lockdown meant the trapping and killing of ferrets, wild cats and stoats had to stop and they got behind. But before the lockdown, they had already caught 33 ferrets, which is one more than they caught throughout the whole of 2019, so they knew it was going to be a dangerous time for kiwis in the bush.

The November 2019 masting [prolific flowering and fruiting] of the native trees, combined with a mild winter and a dry summer meant the mustelid population has “exploded” along with the rabbit population. The conditions for both pests have led to a boom, which is bad news for farmers and bad news for kiwi living in Pukaha Mt Bruce. 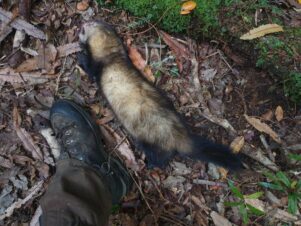 The large male ferret caught a week ago was for Bissell and all involved, a mission they went at with a vengeance.

“It’s a battlefield, but for six weeks one party had to leave the fight, while the enemy stayed out feeding,” Bissell said. “We had this ferret on camera at the site and it took a few days to track it down and then lure it into a trap using some ‘special tricks’.”

The turning point came when Bissell’s apprentice predator dog, Katy indicated strongly on a fresh scent that gave the team the starting point. The hunt began.

“We threw the kitchen sink at it. It is huge pressure, as it was very upsetting for the whole Pukaha team to know the kiwis were at risk. There are so many involved, but the responsibility to fix this on the hill is in the hands of so few. We don’t take this lightly, when it’s happening, we go hard.”

Experienced Wairarapa-based trappers have contacted the Times-Age with reports of “hundreds of rabbits” seen around the Mt Bruce area this season.

Farmers nearby have confirmed this. The farmland around Pukaha is known to be favourable to rabbits. The main issue with this growth is that rabbits are a common food for ferrets and so they are feeding well and breeding well, just outside of the control area.

Ferrets and stoats can travel a long way in search of new territory. A stoat has been tracked over a 60km range in two weeks.

Pukaha Mt Bruce is 942 hectares and is surrounded by a 2700ha buffer zone, which comprises mainly private land. Ferrets too can disperse from well outside the Pukaha buffer zone and then get into the ‘hot’ zone’, in the reserve.

The female ferrets have had good feeding, and subsequently breeding conditions, over the past year and are in prime condition. This has a trickle-down, positive effect [for it] on litter size and survival. The young adults start moving out into their own territory in autumn and can disperse widely.

“What we are finding is that each year we have a wave of young ferrets coming through at dispersal time and we target them then specifically.”

The trapping team operate in the buffer zone and the travel routes coming up into it.

Horizons biodiversity, biosecurity, and partnerships manager Rod Smillie said the 2019 warm winter and following dry summer was a “perfect storm” for Pukaha and the council has been doing extra pest control in the
buffer zone.

What was needed now was a wet, cold winter as rabbits suffer from pneumonia and breeding success would be lower, he said.

Today a specialist unit will begin a 10-day look around the 942ha of Pukaha with the aim of getting a head count of kiwi in the bush. To do this staff are using audio equipment to record calls of kiwis over two years old [kiwis don’t call until this age].