Fighting for a brighter future Laurence Titter and the children from the Wairarapa Boxing Academy with boxer Joseph Parker [centre]. PHOTOS/SUPPLIED

For boxing coach Laurence Titter, there’s nothing more satisfying than watching someone take a swing at a punching bag for the first time.

“It always happens. They put on a pair of gloves, step up to the bag, hit it really hard – and they smile,” Laurence said.

“It doesn’t matter whether they’re a school kid or have a full-time sales job; the reaction is always the same.

“There’s something very human and primal about balling your firsts and hitting something to release energy and frustration.

“In boxing, you can exert that energy and express yourself in a safe and positive way.”

Laurence is the founder and head coach of Wairarapa Boxing Academy, a community boxing gym set up to help young people achieve their full potential through the art of close combat.

In his youth, Laurence was a member of the Naenae Boxing Academy, renowned for helping hundreds of boys and young men transform their lives.

He and wife Channyn, known as WBA’s “Gym Mother”, set up the organisation in 2018, hoping to emulate in Wairarapa what the Naenae Boxing Academy had provided for his teenage self: a safe space, where youngsters can be active, learn self-discipline and resilience, and form healthy, respectful relationships.

In the past two years, WBA has grown to include more than 100 members, from age five to middle age, several of whom have gone to compete – representing the academy at tournaments all over the country. 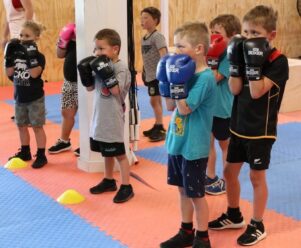 The year 2020 has had some major achievements for the academy: starting its first “littlies” classes for children aged five to seven, providing boxing instruction in schools throughout the region, producing its first female competitor, and members bringing home six gold and silver medals from the North Island Golden Gloves competition.

Speaking with Laurence, it’s clear he is extremely proud of his young fighters – most of all that, since the day they made their first hit at the punching bag, they have grown in confidence and self-respect.

To that end, Laurence said, he has achieved what he set out to achieve.

“Life is a big jigsaw puzzle – and, for these kids, I’m happy just to be a small piece of that puzzle,” he said.

“Since starting WBA, we’ve had a lot of kids come in with their heads down, barely speaking, with zero confidence – telling us they just couldn’t do it.

“Now they’ve realised what’s possible and what they can do, they’ve got their heads up, they look you in the eye, and carry themselves proudly.

“If I can input into their lives for this moment in time, help guide them and help them make good choices, then I consider that a success.”

Laurence has been boxing since the age of six – following in the footsteps of his father, a former competitive boxer.

As a teenager, boxing proved lifesaving when he started “getting into a stack-load of trouble”.

“I had a great family and a pretty great childhood – but we all have choices to make in life, and I started making some bad ones.

“Boxing helped me through – no matter what, I’d always find myself back in the gym. It was my happy place.”

In 2016, he started the process of founding WBA, setting up the Wairarapa Youth Charitable Trust to source funding.

With support from various organisations, including Trust House, the three Wairarapa councils and NZ Police, Laurence and Channyn were able to secure a building – on Dixon St in Masterton – and open the doors to the academy in February 2018.

At WBA, Laurence and fellow trainer Ali Todd, with assistance from some of the senior members, run several trainings a week for the different age groups, where members learn a variety of skills and techniques.

Members can practise using the gym’s equipment, such as boxing bags and focus pads, and eventually, if they wish, can go to spar against each other.

Laurence and Ali also do training sessions with school groups, so far having worked with Chanel, Makoura, Solway and Wairarapa colleges, and Masterton Intermediate, Opaki and Wainuioru schools.

Laurence said the WBA members came from “all walks of life – high decile, low decile and everything in between.”

“In the ring, everyone is equal,” he said.

“Boxing has helped bridge the gap – they have formed some cool friendships that they may not have had at school.”

Laurence is passionate about instilling strong values in young people that they can draw on throughout their lives – particularly respect, compassion and support for one another.

These values come into play at the height of a sparring match – whether training together with focus pads or throwing punches during an intense bout.

“There’s nothing like shedding blood and sweat together to build camaraderie.

“In the ring, you know and understand what the other person has been through, and you respect them for that.

“It’s important that my kids are looking out for each other and are there to drag each other up the mountain.”

Laurence said there had been several rising stars at WBA this year: including 13-year-old Daisee Omundsen, the academy’s first female competitor, silver medallist at the North Island Golden Gloves, and winner of the“Most Promising Boxer” award at WBA’s prizegiving.

Receiving the Head Coach’s Special Award was 15-year-old Cooper Thompson – who has not only given excellent performances in the ring but proved himself a fiercely loyal team player at the Golden Gloves.