The famous Kia Ora Dairy, a long-time Featherston landmark, has been used in an anti-cannabis advertisement without the owner’s consent.

The ad appeared to imply cannabis would be available from dairies if put under government control — this would not be the case. 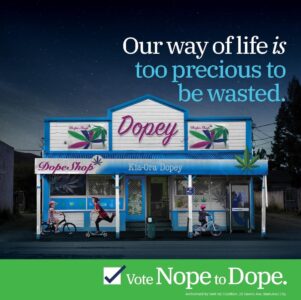 The ad was paid for by the ‘Nope to Dope’ campaign and appeared in a Wellington newspaper this week and also on the campaign’s Facebook page.

Criticism began to flood in after its appearance in the newspaper, with claims that it politicised a treasured Featherston landmark, and misled readers.

If the referendum passed, cannabis would only be available in limited quantities from specialist stores, to customers aged over 20 years old. It would not be available from dairies such as
Kia Ora Dairy.

It would also not be allowed in public spaces. It could only be used in private homes and licensed premises.

Bhairav Patel, the owner of the dairy, declined to comment as he was still waiting to hear the results of his queries about the the advertisement, which he had no knowledge of before seeing it in the paper.

It was understood that the owners were disappointed to see the ad, and their concerns were shared on a Featherston community page on social media.

The photograph used in the ‘Nope to Dope’ campaign was of the original Kia Ora Dairy in Featherston which was converted into a bottle store.

It was near-iconic in Featherston as a stop-off point for ice creams, but it only had one park on the kerb outside.

The present-day Kia Ora Dairy is two doors down and opened in 2014.