More to Featherston POW story than the ‘incident’ A NZ army guard (circa 1943-1945) with rifle and bayonet between two wire fences at Featherston POW camp, the camp barracks are visible on right. PHOTO/WAIRARAPA ARCHIVE

When most people think about the World War II prisoner of war camp in South Wairarapa, they think about the ‘Featherston Incident’ in 1943 that left 49 people dead. But wonderful artworks created by the Japanese prisoners remain decades later and continue to provide a deeper understanding of what life was like for the men behind the wire. HAYLEY GASTMEIER reports.

During World War II, up to 900 captured enemy soldiers – the majority Japanese – were held in Featherston. 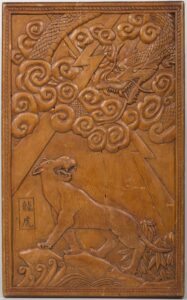 A relief sculpture made by one of the Japanese prisoners of war, who was imprisoned in Featherston during World War II. PHOTO/SUPPLIED

The prison of war (POW) camp, was established on the site of the former World War I-era Featherston Military Training Camp.

It is most remembered as the site of an incident in 1943 that left 49 people dead, details of which have never been fully revealed.

But there is another less well-known story about the Japanese prisoners imprisoned far from home.

The building of the camp left a lot surplus scraps of wood lying around.

From these offcuts, the Japanese prisoners used homemade tools to carve impressive objects that they traded with the camp guards for cigarettes, or gave away to friendly locals.

Associate Professor Richard Bullen, of the University of Canterbury, has been studying Japanese art and aesthetics for more than 20 years.

He began researching these carved artworks last year, when the television series Heritage Rescue came to South Wairarapa to restore the Featherston Heritage Museum, where many of the pieces made by are housed.

“[The POWs] made their own tools out of bits of wire and nails and from them they carved objects,” Dr Bullen said.

“A way a lot of these objects came out [of the prison] is they were made and then exchanged with camp guards for cigarettes.”

Dr Bullen said the POWs began putting their artistic talents to use not long after becoming imprisoned.

Many of the relief sculptures were of traditional Japanese landscapes and women.

“You can imagine these Japanese men, they’ve been captured, they’re feeling shame and now they’re living in a prison and they don’t know if they’re ever going to see Japan again.

“They made these objects, which are really quite nostalgic and have a real feeling for the beauty of Japan.” Dr Bullen said it appeared a great deal of care had been taken with many of the artworks, which were of “quite surprising quality”.

Aside from trading them for tobacco, sometimes the objects were given away.

The prisoners were often sent out on “work parties”, to clear gorse or scrub, for example.

“From a letter, we know that a sculpture was given to a little girl who used to wave at the men as they went past.

“There’s another sculpture that was given to a nurse at the Wellington Hospital who looked after the men after the shooting.”

On February 25, 1943, a riot broke out at the camp after a number of prisoners refused to follow the orders of camp authorities.

In the confusion shots were fired and 48 Japanese prisoners were killed and 63 wounded. One NZ guard, Private Walter Pelvin, died.

The injured were treated in Wellington, as well as at Masterton and Greytown hospitals, and the Anzac hall in Featherston.

Dr Bullen said the camp was widely remembered for the incident, and not much else.

But for the majority of the time, the POWs and the guards got along well. 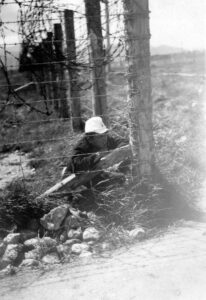 “What these artworks do is they open up a new area of thinking about the camp… and understanding of its social history.

“It adds another dimension.”

Dr Bullen is aware of about 10 mahjong sets, which the prisoners would have made and then played to pass away the time.

Many of the works remain in the possessions of the guards’ families.

Outside Featherston, some of the artworks are also housed at Aratoi, Auckland Museum and at the National Army Museum in Waiouru.

“The remainders are all in private collections,” Dr Bullen said.

The 75th anniversary of the “Featherston Incident” was commemorated through a number of events over the weekend.

On Sunday, Dr Bullen gave a presentation on the art of the prisoners, ‘Remembering Home from Featherston’, at Kiwi Hall, Featherston.

Featherston Heritage Museum has in its collection about 50 of the prisoners’ works.

“For this commemoration we’ve put as many of the items from our collection on display so people can admire them,” museum treasurer Lesley Wardle said before the event. 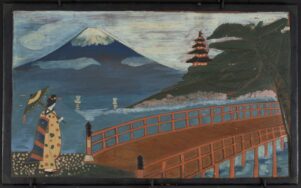