With niche shops popping up all over the place and a community filled with colourful, passionate characters, Featherston is skyrocketing into fashion. Events like Booktown, First Fridays, plus a property boom to boot, are putting the South Wairarapa town on the map. HAYLEY GASTMEIER reports.

The Saturday fresh produce market kicked off last year and has since attracted people from all over the region.

The Featherston Market is held behind  Lang’s Pharmacy car park and features stalls by Wairarapa businesses, including the Pop-up Doggy Deli and Scotty’s Meats, Martinborough.

Featherston sourdough master Martin Grice, who owns The Baker, says the market has added an energy to the weekend, and has also increased his customer base.

But Featherston has “always been awesome,” he says.

Having lived there for 14 years, Mr Grice has seen the town take off.

“It started with Cornucopia, the cafe, and then Colonial Trading Company with boutique hardware came along . . . and then C’est Cheese and Everest started up.

“So it’s been going from strength to strength, based on those first few businesses.”

The monthly Featherston First Fridays event has also been a hit, uniting the region at the newly finished Town Square over art, picnics and music. 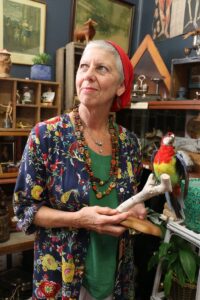 The Royal Hotel is undergoing a steam punk facelift, with owner Rob Allen saying it will be reopening in the coming months.

“The place is really owned by Featherston,” Mr Allen says, “and the locals are excited they’ll be getting their hotel back soon.”

A new retail complex is in line for the empty section on Fitzherbert St, next to the Town Square.

Developer Marcus Darley says, all going to plan, the complex will feature both retail stores and eateries.

He is betting on it opening before the year is out.

Mr Feather’s Den owner Sue Ryan says the name of her store, which is a mix of quirky items like taxidermy and Picasso inspired lampshades, is a play on the town’s name.

“Featherston’s been thriving for some time now,” she says.

“There are new businesses opening all the time, the buildings are filling up fast, there’s hardly any commercial space left.” 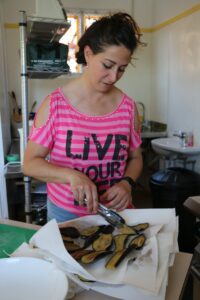 Adding to the culinary variety is new Italian deli, Sweet and Salty.

As a small child, owner Elisa Romani remembers tucking into sultanas while sitting on top of flour sacks, hiding from adults in the storeroom of her great-grandfather’s flour mill.

Well-travelled and with a background in human rights law, Ms Romani says she misses her career working alongside refugees.

But her new path is reconnecting her to her roots.

Now she is cooking up family-sized lasagnes and aubergine parmigiana for busy Featherston commuters to pick up after a long day.

“I’ve been cooking since I was a child. You learn from your grandma, your uncle, your aunties.

“You’re learning to cook all your life, that’s just what you do,” she says, recalling Cerreto Laziale, where she was raised near Rome.

Since opening the deli, her panna cotta and cannelloni with spinach and ricotta have been hits.

“And people are going crazy for the tiramisu.”

“There’s nothing made in bulk, and it’s all made the traditional way using authentic Italian ingredients.”

Sweet and Salty is open Monday, Tuesday and Friday, from 4pm to 7pm, and 10am to 4pm in the weekends. 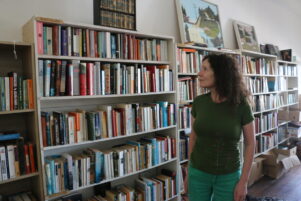 Loco owner Kate Mead is also the director of Booktown, to be held from May 12-14. PHOTO/HAYLEY GASTMEIER

With three dedicated bookshops and the addition of Booktown (May 12-14), Featherston is on track to becoming Wairarapa’s literary hub.

And at cafe Loco, books and coffee go hand in hand.

The cafe is open seven days a week and even when it is closed books are on offer.

“There’s a free book exchange at the back, and afterhours kids can access free books from the box at the front of the shop.

“It’s really well used,” she says, adding that last week she filled it with the complete works of William Shakespeare.

“They stayed there for about five days and then they were gone – I was so pleased.”

Ms Mead is in the process of applying for a liquor licence, and has young musicians lining up to play for the customers.

She hopes to hold weekend book readings for children. 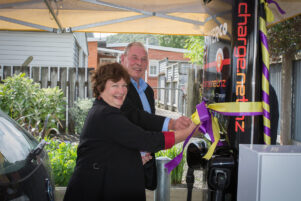 South Wairarapa Mayor Viv Napier mans the new electric charging station with Colin Olds, who was a catalyst for seeing it come to the town. PHOTO/FILE

Ms Mead says the electric vehicle charger in the SuperValue carpark has led to new visitors.

“It’s attracting people to stop and look around why they wait for their car to charge.”

Her husband Ross Vickery says when he first moved to Featherston “to the untrained eye it didn’t look like there was much going on”.

“What surprised us was the number of groups of dedicated, nice, long-term residents who were doing things in in committee and individually to enhance the town.

“Newer residents have connected with those people and communication between interested groups and projects has created a synergy which is very inspiring and fruitful.”

“The business owners are upbeat, you’re seeing people wandering along the street, and the new community board is wanting to work positively in Featherston.”

Mrs Napier said the recent commemoration of the “Featherston incident” had seen a great turnout, and watching the community come together for the makeover of the Featherston Heritage Museum was “amazing”.

“I have visited Featherston School, the roll is increasing and they are doing great things with their kids.

“And I’m told that it is very hard to get houses to buy and rent.

“It’s really great to see so much happening and positivity.”

“The fact that property is selling in a quicker time frame, and for a lot more above RV, pretty much tells the story.”

Ms Nesdale says house prices are “continually going up” and the number of buyers outweighs the listings.

She is “continually bombarded” with new buyers, the majority of which are from Wellington.

“They’re just getting bigger bang for their buck over here.

“If they’ve got a property to sell over there, they’ll sell it at a good rate and then come over here and they’re able to get a bigger house and more land.”

She is also selling properties to the odd Auckland investor or Aussie buyer.

“We’ve got a lot of new businesses coming in and extending and changing.”

An example of this is gift and collectables store Dandelion, which has moved from its main street premises to a larger space on Fox St to allow expansion into a gallery and cafe.