Marie Wright, Zach McDonald-Wright and Taralee Freeman have been announced as finalists for WOW 2021. PHOTOS/SUPPLIED

From moulding sculptures to fashion design, a Featherston artist, and her equally talented team, are about to wow many new fans on an international scale. JOHN LAZO-RON reports.

The designers for this year’s World of WearableArt [WOW] Awards Show have been announced, and one design team from Featherston will be under the spotlight this year.

Taralee Freeman [Featherston], Marie Wright and Zach McDonald-Wright [both Wellington] will join 18 other finalists from the Wellington region in the capital this year, showcasing one of their creative designs in Aotearoa’s most spectacular theatrical stage production.

Freeman, who has lived in Featherston for 20 years, will be going up against 108 other designers in this year’s event, some of whom have previously made items for celebrities such as Lady Gaga and Beyonce.

Despite the intense competition, she said she was excited and humbled to be in the mix and display what her team had created.

“I think I can speak for the three of us that it is an absolute honour to be able to represent the Wairarapa, but also the Greater Wellington region in such a prestigious event,” she said.

“There are some designers who are right up there, really huge. Some with their own line. So we are really humbled to realise that there are three little people who quietly work away and managed to get there as well. 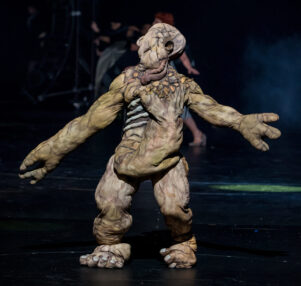 Theodore was a 2017 finalist entry that Taralee created with Marie Wright.

“I’m just really quite thankful that I work with such a fantastic team, and we work together well. We allow our work to shine, and it all comes together beautifully. It is an absolute honour, and we will aim for the stars.”

It won’t be the first time the trio have been a finalist in WOW, with previous finals outings in 2017 and 2019. However, Freeman will lead the team for the first time this year. Marie and Zach led their previous entries.

Asked about what they were entering, Freeman was keeping tight-lipped because she couldn’t discuss what her team had designed for WOW as it had not yet been displayed.

She did, however, mention the garments and the inspiration behind it, with builders paper, tissue, vintage paper, fabric, leather, custom jewellery, paint, metal and an EVA phone all being used in the design.

“The inspiration behind this year’s piece is remembering the past,” she said.

“By doing so, we carry a little essence of that into our future, and that reminds us where we came from and how we got there.

“It’s literally mixed-media at its best.”

Although it seems like Freeman is now a seasoned campaigner with WOW, her walk into the prestigious event all came by chance.

Before 2017, she was solely an artist. While displaying some of her work at an exhibition, Marie approached her about teaming up for WOW, which she initially thought was way out of her league.

However, she realised there “weren’t too many big differences”, so took it on board and hasn’t looked back.

“I honestly didn’t think it was something I would be able to do,” she said.

“I thought, oh gosh, but it turned out that working with fabric was no different than sculpting. It was just another crossover, and it ended up blossoming into something quite beautiful.”

Since then, Freeman said fashion design had opened many doors for her, including entering items at the Eco Fashion Awards.

She said the trio were now looking forward to being wowed by their own item for the third time, as she said it would “all come to life” when it hits the big stage. Tsubasa from 2019 was a finalist entry that she created with Marie Wright and Zach McDonald-Wright.

“When we design and create, we allow the piece to guide us, and once it does, that’s where the magic happens. But it’s not until it actually goes on stage, where it comes to life through the models and choreography.

“They take what we created and make it better.”

Freeman said she has ambitions to teach and inspire aspiring artists and designers in Wairarapa about the trade and let them know they can make it on to the big scale.

“I want to teach young people who may have a little idea and fan that little spark and make it grow and let them know it is actually possible, especially in Wairarapa.”

WOW will run from September 30 to October 17, with an audience of more than 60,000 people expected to attend.