Linda the cat had stolen at least 10 complete pairs of socks – with more unmatching. PHOTO/TOM TAYLOR

For some time, guests at Carterton Holiday Park have been waking to discover that their socks have gone walkabout in the night.

However, a plea on social media has turned up what appears to be the culprit: a black cat by the name of Linda.

Carterton Holiday Park owner Sharrie Gibbons said that four workers had been staying in cabins at the park. Before retiring for the night, they had removed their boots and left them outside, with the socks tucked inside them.

“They got up in the morning, and all the boots were there, but there were four pairs of socks missing,” Gibbons said.

After a guest suggested a potential perpetrator for the crime, Gibbons posted on Facebook group Carterton Notice Board on Wednesday night:

“We run the Carterton Holiday Park, and some of our guests are losing their socks from around their sites and cabins. Has anyone in the surrounding area got a cat who has a fetish for socks?”

One commenter suggested it was “Dr Suess on the loose”.

Another proposed that a human may have acquired a taste for the socks.

However, another commenter soon came forward, claiming that her cat Linda was the most likely offender – with evidence to back it up.

“It started off with kids’ toys and pyjamas and things,” owner Gemma Chipp said.

“It was quite embarrassing. There was a wee trail through our neighbours’ backyard to our bathroom window, where they got back into the house. I could only assume it was my cats.”

About three years ago, Chipp had adopted three black kittens from the SPCA. Two of them were related, and both had started compulsively bringing socks into the house.

When they were little, the cats were quite incorrigible. However, Chipp had thought that the phase was over by the time she moved in next door to the holiday park. 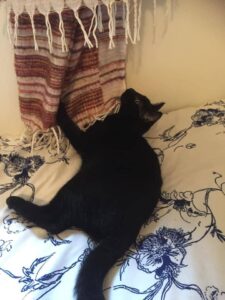 “It had been about six months, then just before Christmas, she started up again. But I only actually caught her with a sock in her mouth about a week ago.”

Efforts to stop the cat had so far proved futile.

After Gibbons brought to light the extent of the thievery, Chipp had kept Linda locked inside on Wednesday night.

But on Thursday morning, an hour after letting her outside, the cat had brought Chipp another fresh pair of socks – plus an extra odd sock for luck.

She brought a bagful back to the campsite on Thursday morning, gratefully received by Gibbons.

“Hopefully, the guests we have coming back in tonight can find their socks among them.”

However, Phil Gibbons said that was just the tip of the iceberg.

Once he knew which section the cat was coming from, Phil walked around the edge of the holiday park to see if he could find any more misplaced items of clothing. He was not disappointed.

“I found another eight or nine socks, tea towels, and a headlamp. Some of them were lying in the ground, but about four or five socks were hanging in a tree. Whether she was trying to make a bed or something in there, I don’t know.”

A golf glove and a headlamp were among the retrieved items.

Phil had seen a black cat roaming through the campsite on occasion and said its black fur provided an extra layer of stealth.

He said the cat must be a fearless feline to make its way through a dog-friendly campsite at night.