A “townie” teen is realising her ambitions of a dairy farming career thanks to a local youth employment scheme and a rural organisation dedicated to helping young people enter the workforce.

Once a week, Year 13 student Jo Stammers trades her Makoura College uniform for a hi-viz jacket and gumboots – leaving the comfort of a warm classroom for a day of hunkering down freezing milking sheds, handling new-born lambs, and mending several kilometres of fencing.

Jo is in her second year of work experience at NEER Enterprises, a large-scale farming operation based in Carterton – and recently accepted a job offer from the company.

Her work experience placement was organised by the region’s Youth Education, Training and Employment Partnership (YETE), whose Youth Employability Programme (YEP) – Licence to Work (L2W) initiative was set up to prepare youth for the working world, providing secondary school students with mentorship and on-the-job training from local businesses.

L2W, launched in Wairarapa last year, was created in response to industry concern that young New Zealand workers lacked the transferable skills, such as problem solving, communication and resilience, most valued by employers.

As one of YETE’s partner organisations, Makoura College has put several of its students forward for work experience with various companies. 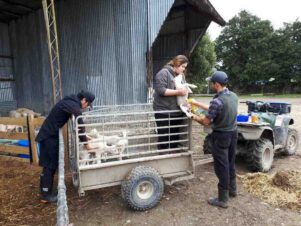 Jo Stammers at work on the farm. PHOTO/SUPPLIED

But few youngsters have been put through their paces quite like Jo – for whom, a typical day on the farm at NEER Enterprises could bring anything from feeding lambs and weaning calves, to engineering maintenance work and building fences, or driving forklifts and bobcats.

Despite her urban Masterton upbringing, Jo is undeterred by the physical demands and sometimes harsh conditions of the farming world and was “thrilled” to receive a job offer.

“I’m glad all the hard work has paid off – it’s pretty cool,” she said.

“On the farm, you do whatever’s asked of you.

Anything from milking cows, to cleaning out the pig pens, to removing branches from the side of the road to make things look tidier.

“It’s always exciting when the kids land on their feet and end up in the fields they’re passionate about.

“When you’re happy in your job, you’re going places.”

King said Makoura has been on board with L2W since it was first introduced, as has incorporated the programme into its curriculum.

Students enrolled in L2W learn about the seven key employability skills – communication, teamwork, self-management, willingness to learn, thinking skills, resilience and a positive attitude – while in school, and must complete an 80-hour work experience placement, as well as some volunteer work.

King said L2W was a natural extension to the school’s existing Gateway programme – a nationwide initiative, where Year 11-13 students do work experience placements in the field they aspire to, or which best compliments their capabilities and interests.

“Both Gateway and L2W allow students to get a taster of that particular job in a safe environment,” she said.

“They can find what they like and dislike about a job, and if it suits them.

“[The programmes] also encourage companies who may not have previously been open to working with young people to give them a chance.”

NEER Enterprises, where trainee Jo is currently placed, is one such company which prides itself on its opportunities for youth, and its management was only too happy to partner.

The family-owned business was founded in the 1960s, originally specialising in pig farming, and eventually expanding its operations to include dairy, sheep and beef, and sheep milking.

Operations manager Kevin Cocker said NEER Enterprises has a history of offering work experience, and, eventually employment, to young people, hoping to attract and encourage a new generation of farmers

“At one stage there were very few young people coming into the industry,” Cocker said.

“We’re passionate about motivating the young ones to come farming, and we want to see them excel.

“Plus, we need people to come forward and replace us older guys – we’re not going to be around forever.”

Cocker said Jo had been “a consistent pleasure to work with”.

“You can chuck any task at her, from putting up electric fences to shifting stock, and she’ll do it to the best of her ability.”

Jo hopes to follow in the footsteps of several family members – including her older brother – who own and manage farms in various parts of the country.

At NEER Enterprises, she said she has met “lots of cool people”.

“The farm workers just treat me like I’m just another worker.

“They don’t treat you like just a student – instead, you’re their equal.”

Even a minor injury sustained while climbing over a fence on the farm hasn’t dampened her enthusiasm.

“I had a big bruise on my ankle, but I was up and about after a few days, and didn’t miss any work.”