The streets were packed for Martinborough Fair on Saturday. PHOTOS/SUE TEODORO

After a postponement in March because of covid and despite a looming threat of rain, the second annual Martinborough Fair was a bumper day on Saturday.

While rain bucketed down early and a few stallholders pulled out, most held their own against the early showers and by 11am the weather cleared, and the crowds arrived.

An estimated 23,000 shopped, ate, and walked through the streets around the central square, where over 500 stalls did a bustling trade for most of the day. 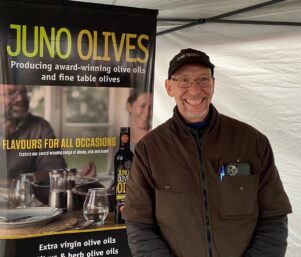 “It was fantastic. I think it went very well. It was well worth the effort. It was well-received by stallholders who have a lot invested in having a fair,” he said.

“It started raining and a number of people gave up, but the rain went away, and the crowds came. It was probably as busy a fair as we’ve ever had.

One outfit that did give up was Plimmerton-based Shades at Grays, who posted their cancellation notice on Facebook at 3.45am on Saturday.

“Rain on the roof! Rain forecast all day,” the post read.

“We’ve made the difficult decision to NOT set up at the Martinborough Fair. 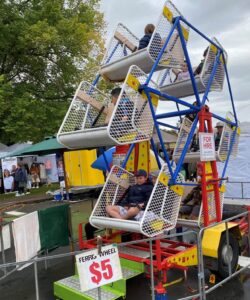 Ferris wheel at the fair.

Most were undeterred, with positive reports across the board.

Jan Abernethy from Lavender Abbey in Carterton was there with a range of home-made products, including sleep lotions, healing balms and even a lavender-themed calendar.

The weather hadn’t bothered them, and they came well-prepared with a gazebo which held off the worst of the early rain.

“It’s been busy, it’s been really good,” she said.

Andy Liley, who has bought Juno Olives near Greytown, was there with a range of olive oil and said trade had been steady.

“There’s no such thing as wrong weather, only wrong clothes.

“Everyone seems very happy to be here.” 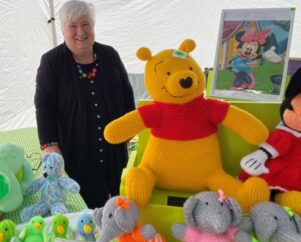 Nearby, Wendy Jamieson from Palmerston North was selling colourful handcrafted toys, including Winnie-the Pooh, dinosaurs, elephants, owls and more. Her day had started at 5.30am.

“Today’s been really good. The rain held people off, but now it’s much better. There are lots of people here.”

Kylie Tawharu and Wendy Phillip of Bath Treats Soapery had also come for the day from Palmerston North. They were selling soap, candles, bath salts and wax melts.

She said the day had gone very well, including a good number of repeat customers.

The fair wasn’t only for humans, with quite a few stalls catering to canines and other pets.

The Bagem Collection featured a range of New Zealand-made dog beds, collars, and other accessories.

Owner Kirsty Hill had come well prepared with a gazebo but said the rain had not put people off.

The South Wairarapa Rotary Club runs the Martinborough Fair. Funds raised would be used to fund bursaries and other youth-focused projects, including driving and leadership courses, buying books for schools, and general community projects.