During World War I, New Zealand’s small population of around a million meant almost every Kiwi knew someone who trained at Featherston’s military camp. Now, fading from memory, the camp is being commemorated with a large work of art which will give Featherston a unique link to London. HAYLEY GASTMEIER reports.

When Featherston’s Bernard Jervis approached Paul Dibble with an idea for a sculpture commemorating the Featherston Military Training Camp, the world-renowned sculptor said, “Yes, I’d like to do that”, however, he questioned how a small community would meet the cost of it. But three years later, a trust had been set up and enough money had been raised to have Dibble begin work on the Featherston Camp Sculpture.

Nine slanted metal columns at 3.5 metres high will be reveiled adjacent to the Featherston Town Square on Fitzherbert St in time for the anniversary of Armistice Day this year.

The pillars currently stud the centre of the large Dibble workshop in Palmerston North.

And while they are not yet finished, they are already covered in pictures and words that convey what life was like in the camp.

Featherston Military Training Camp was built by the Public Works Department in 1915 after the outbreak of World War I.

The camp, opened on January 24, 1916, depended on Featherston and its residents for essential supply and support services.

More than 60,000 soldiers went through the camp before going to the Western Front, Egypt and Palestine.

The camp had its own post office, railway link, hospital, bakery, butchery, and kitchen messes, as well as shops, clubs, and places of worship.

The pillars of the sculpture will tilt towards the Remutaka Hill to represent troops marching over to Wellington on completion of their basic training.

For Dibble, 75, the project is an echo of ‘Southern Stand’, a New Zealand War Memorial, which he co-designed with architect John Hardwick-Smith, in London’s Hyde Park.

Unveiled in 2006, the sculpture is made up of 16 bronze adorned standards and is a memorial to the Kiwis who died in both world wars.

Dibble said he was rather proud of the major work, so agreed to take on the Featherston project and to design it so it complemented the Hyde Park monument.

The Featherston Camp Sculpture was the dream of Dr Bernard Jervis, who retired to Featherston and was heavily involved with many charities and community groups.

However, his vision is imprinted on one of pillars: “We do not think that the design should present itself as a monument to the war at all, nor soldiering, nor the fallen”.

“Rather, we are looking for a concept to present a positive image of a small town ‘doing its bit’ in a time of global crisis. “The camp brought out the best in most of those who passed through it, and involved a provincial town in the national contribution.

“Much of this has been forgotten, little remains to remind the people of Featherston their family members and previous townsfolk took centre stage a century ago.”

Dibble says when Jervis approached him, he wasn’t entirely convinced the sculpture would go ahead.

“There’s a huge cost in making these . . . so years went by and [the trust] kept in touch, but I thought it was a lot of money to raise if you’re selling cakes at a cake stall . . . I thought it would take a miracle for them to be able to do this.

“But anyway, after about three years they got in touch again and said, ‘Yes, we’re ready to go’, and I still only half believe it.”

McDowall says this was the result of a major fundraising effort by the trust, with key funders being the Lottery Grants Board, Trust House, the Lion Foundation, First Sovereign, and the Nikau Trust.

The Featherston Senior Citizens Club sold its premises and donated $10,000 to the cause, and contributions were also made by the South Wairarapa District Council and the Featherston Community Board.

Donations came from all over the country, which McDowall says demonstrates just how many lives the camp played a part in.

“New Zealand was a really small place, there were only a million people.

“Sixty thousand or so people went through that camp so just about every family in New Zealand would have had some connection.”

She says the sculpture is a history project, not a war memorial.

“Education through public art, that’s our tag line. And it’s a part of history that’s been largely forgotten.”

Dibble, a Member of the New Zealand Order of Merit for services to the arts, admits he’s not pleased with everything he turns out – “some of the very bad ones go back in the pot” – but he’s pleased with t 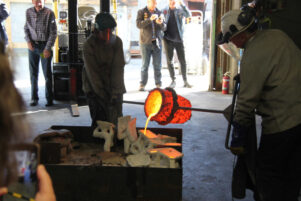 he Featherston project, saying “it’s right up there with Hyde Park”.

All his artworks are very much a team effort, with his wife Fran conducting the foundry side to projects these days.

South Wairarapa Mayor Viv Napier was “blown away” when she saw the sculpture for the first time.

“I just can’t get my head around how amazing it is, it’s got all the stories – the things people don’t know about the camp, the story of the horses, it links to the flu epidemic, and just gives you an insight into what camp life would have been – it’s just unbelievable.”

She said it would be a great feature in central Featherston and would be a drawcard to the Wairarapa region.

The sculpture will be dedicated and gifted to Featherston and the nation on November 10.