Event chefs are lovin’ the oven Rose and Smith will run two events as part of this year’s Wellington On A Plate. PHOTOS/SUPPLIED

The team behind Rose and Smith are no novices when it comes to putting on the perfect event, with three busy wedding seasons under their belt and the next already in the works. Chef Dale Keith says the business has entered Wellington On A Plate [WOAP] for the past two years, with last year’s events themed around Matariki.

This year the venue would offer two events, both putting its outdoor kitchen and communal seating setup to good use.

First up would be ‘Lunch in The Med’, which would have guests lunching on long wooden tables among olive and lemon trees.

“Because people aren’t travelling,” Keith says, “The thought was almost to bring a country into Wairarapa.

“Mediterranean was really easy because when you go there, especially in Greece and a bit of Spain, there’s a lot of charcoal wood cooking.”

This idea of bringing the world to Wairarapa would also inspire the establishment’s other event, ‘Barbacoa and Beats’, which would have Keith recreate the central-Mexican flavours of the Yucatan. While the word ‘barbacoa’ [root of the English word ‘barbecue’] in Mexican Spanish referred to an underground oven, Keith would instead use the fire and coals in his outdoor kitchen to bring out the style’s signature smoked flavours.

“Barbacoa is predominantly cooked low and slow in the ground,” he says.

“I think the main difference with what I do is we have outdoor ovens.”

The ovens would run on locally sourced apple and olive wood, collected from Wairarapa’s orchards and groves.

“What’s good about the fruitwood is that it burns a lot hotter,” Keith said.

“You get a better crust, a better sear.”

He was inspired by the casual nature of Mexican dining, and the sharing, friendly atmosphere it lent itself to. 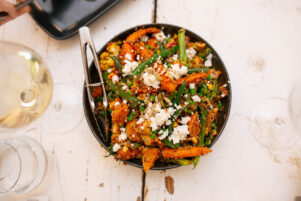 “And I love Mexican food and there’s no Mexican restaurants over here!”

Premium Wairarapa meats would be slow-cooked for this three-course fiesta.

Appetisers such as Kingsmead chile con queso, empanadas with Tora Collective tuna and Greytown Butcher chorizo, and Palliser Ridge lamb oyster shoulder would be on the barbacoa.

Churros with Schoc’s chilli chocolate would round off the evening.

“It’s twofold, it’s primitive,” Keith said, saying the event would cater for all five senses, including the tantalising smells from the outdoor kitchen and the Latin beats on the dancefloor.

“They see us cooking, it so it’s visual as well,” he said.

“I try and do it as authentic as we can.

“It’s just trying to marry the style of cooking with the cuisine, and once that’s done, it’s just bringing in the local produce.”

Keith has been in Wairarapa for about a decade and has seen the food production scene change in that time. “Over the 10 years I’ve been here, the range of produce has grown. There’s way more than there ever was.”

While the region was well known for its wine, olives, and fruits, the quality of its greens and vegetables were a well-kept secret.

“It’s our way of showcasing Wairarapa – the wine, the food.

“Wairarapa is Wellington’s playground. Lots of people to come over the hill.”

The demand for Rose and Smith’s WOAP events in the past two years meant the venue would be hosting at least two days of each event this year.

The business had a good relationship with the neighbouring race club, with its rent put toward doing up the 1923 building and the racecourse itself.

Ultimately, it would be about giving guests “an amazing experience”, Keith said.

“When we do the weddings we’re serving 4000 or more people a year.

“We’re giving them the Wairarapa experience, the night sky. We just want them to have fun, relax, and have a bit of a party.”

Wellington on a plate will take place from August 1-31. For more information, visit www.visawoap.com