End to barrage ‘before Christmas’ Vic Gadsby has picked up four wayward golf balls in the past week. PHOTOS/GIANINA SCHWANECKE

The bombardment of golf balls on Vic and Carolyn Gadsby’s Solway home is nearing an end, “most definitely before Christmas” Trust House chief executive Alan Pollard said on Thursday.

The Gadsbys have lived on George St for almost 40 years.

For about half of that time, they have felt under siege from the stray golf balls landing in their property from the neighbouring Solway Park golf driving range owned by Trust House.

Vic Gadsby said the balls had damaged cars parked at his home, the windows, the spouting and the roof. 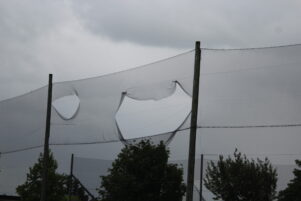 Golf balls get picked up in strong winds and go through holes in the netting at the Solway Driving Range.

He said it was particularly bad during high winds because the balls would go through unrepaired holes in the netting at the driving range.

In August last year, it was announced the golf driving range had been sold to make way for a $35 million retirement village.

Construction had been expected to start early this year, and Gadsby believed the range would be closed while construction was under way.

However, delays meant that had not been the case and just last week he picked up four golf balls again.

“It should never have been built in a residential area.

“If the property has been sold, why are they still using it?”

The land had been sold to developer Steve Pilbrow of Westwood Group but the driving range had continued to operate while the development was stalled, Pollard said.

It was the first time he’d heard about the holes in the netting though.

“Traditionally when we’ve had holes, we’ve fixed them. I can’t think of any reason why we haven’t fixed them.

“It certainly not a strategy that we haven’t fixed them because we’ve sold the property.”

He said the driving range would definitely be closed before Christmas.

Pilbrow said Gadsby would likely be pleased by an announcement expected to be made early next week.