Owner Chris Martin is the largest free-range egg producer in the Wairarapa and one of the first to sign up to an egg-cellent innovation which allows Kiwi customers to trace their eggs back to the farm they came from.

The voluntary tracing programme, Trace My Egg, came into effect earlier this month. 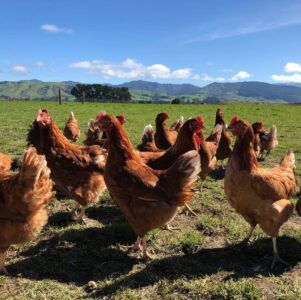 Initiated by New Zealand’s Egg Producers Federation [EPF] it helps ensure that the eggs people want to buy are the eggs in the carton.

A 2017 Newsroom investigation, found millions of free-range eggs sold at Countdown had actually been laid by caged hens, prompting those in the industry to consider better tracing methods to hold farmers to account.

Eggs are stamped on site at the farm using a food grade ink, outlining the production system and farm the eggs came from.

The two letters before the three-digit farm code detail how the eggs were produced: free-range [FR], barn [BN], colony [CL], cage [CG], or organic [OR].

To verify these details, consumers can enter the five-digit code stamped on their eggs at tracemyegg.co.nz

It follows warnings that eggs prices may be set to rise as New Zealand supermarkets begin to phase out sales of cage eggs by 2027 and as producers adjust to meet new requirements under the Animal Welfare Code of Practice for Layer Hens, banning cage eggs.

Martin was quick to sign up to the tracing programme so that buyers can be assured of his egg’s free-range origins.

“Making my eggs traceable and my farm operations more transparent, we can connect with consumers in a new way with a collective goal to rebuild the trust in the industry,” he said.

His free-range hens have access to the outdoors 24 hours a day, though a barn provides shelter at night and private nesting boxes where the birds are free to lay their eggs. 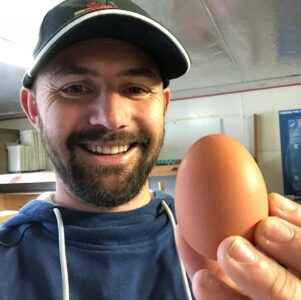 “Free Range eggs are so good for you – they’re not only nutritious but you can feel good about where your egg came from,” he said. “We provide our hens with the best of care.”

Martin hasn’t put all his eggs in just one basket either, so to speak.

He also recently introduced a range of Chester Road premium free-range eggs, which come in packaging made from 50 per cent grass.

The new cartons help reduce water consumption and have a lower carbon footprint than most other carton types.

The tracing programme is one of the most ambitious assurance projects led by those in the primary industry, EPF executive director Michael Brooks said.

“New Zealand’s egg industry has world-class farming practices and a unique disease-free status, yet a few bad eggs have threatened its reputation in recent years. To help prevent this from reoccurring we have a purpose –built a programme specifically for New Zealand that provides consistent source assurance across the industry and puts control back in the hands of the consumer.”

“Our high standards in this area have not necessitated stamping for this reason,” he said. “For us, this is about providing assurance of the egg’s source for consumers.”

The egg stamping programme will be audited by independent watchdog, AsureQuality, who will carry out random spot checks on participating farms, and the Ministry for Primary Industries.

Though the programme is voluntary, it already has support from the majority of supermarket egg suppliers around the country.

“Because we are a trade association, the EPF cannot mandate producer participation, but the robustness of the programme has already motivated sign up from many farms nationwide which collectively provide more than 70 per cent of eggs supplied to supermarkets,” Brooks said.

“Consumers will start to see the distinctive Trace My Egg logo on the carton exterior which shows these brands are part of the programme.”

Fellow Wairarapa egg suppliers, Henergy, were not yet signed onto the programme but would consider it, chief executive Michael Jamieson said.

“It’s a good solution for a number of players in the industry,” he said. “But it’s quite a lot of extra cost for a problem we don’t have.”

As a single brand, single farm supplier all eggs came from the same property near Bideford and were sold under the same Henergy label.

Jamieson said investing in the printing system and joining the programme would be dependent on what supermarkets and their consumers wanted from the brand.