Figures show there is room for improvement 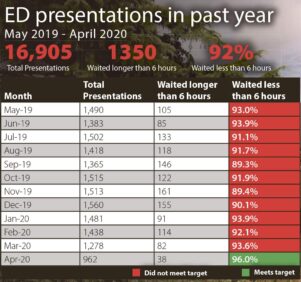 Wairarapa District Health Board failed to meet Ministry of Health guidelines for emergency department waiting times for 19 months of 22, a report shows.

All DHBs have a target of achieving six-hour wait times or less 94 per cent of the time.

Its lowest result was in September last year when 10.7 per cent of patients waited longer than six hours.

It met the ministry guideline for three months of 22, the most recent being April, with 96 per cent of people waiting less than six hours.

But this could be attributed to a drop in ED attendances due to covid-19 lockdowns.

The DHB agenda said ED attendances dropped by more than 23 per cent in late March and throughout April compared with the same time last year.

Through an Official Information Act request to the Wairarapa District Health Board, the Times-Age found that the busiest month in ED last year was January, with 1600 presentations.

The longest waiting time was in November where a patient waited 16 hours.

The waiting time begins when a person arrives at reception and ends when the person is discharged, transferred, or admitted to hospital.

Acute Services charge nurse manager Kathryn Wadsworth has previously said long waiting times like this were out of context and did not reflect the goings-on at ED.

She said a patient coming in and being treated in ED might be more comfortable staying in the bed in the bay overnight, rather than going home in the middle of the night, resulting in a 16-hour waiting time.

These averages are well below the Health Ministry’s target of six hours maximum.