Technicians from Scripps Institution of Oceanography in the US, Chris Armerding and Jake Perez, launching scientific gear from Niwa’s research ship Tangaroa. PHOTO/SUPPLIED

One of the largest sources of earthquakes and tsunamis in New Zealand was investigated over the weekend by scientists, just off the Wairarapa coast. GRACE PRIOR reports.

The Hikurangi subduction zone, off the East Coast of New Zealand near Wairarapa, is thought to be capable of generating magnitude 8-plus earthquakes and tsunamis.

At the weekend, Kiwi researchers from GNS Science and National Institute of Water and Atmospheric Research were joined by scientists from Japan and the United States to investigate it.

It was their second voyage to the subduction zone, where the “Pacific Plate dives down, or ‘subducts’ beneath the east coast of the North Island.

It is New Zealand’s largest fault. 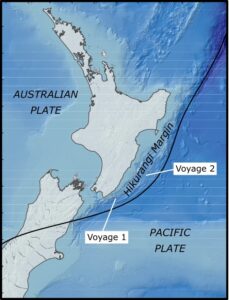 The location of the two voyages. IMAGE/SUPPLIED

In their first voyage, which was recently completed, researchers “deployed specialised equipment from the United States on to the seafloor to visualise the structure of the subsurface and investigate how fluids are distributed within sub-seafloor sediments”.

Programme leader Dr Jess Hillman from GNS Science said this enabled scientists to “better understand how the movement of fluids is related to activity on our largest offshore faults and the occurrence of subseafloor gas”.

Earthquakes, seafloor slope stability, and seafloor gas release are all governed in some part by the presence of fluids, Voyage specialist Dr Peter Kannberg from Scripps Institution of Oceanography in the US said.

“Our instrumentation can detect where these fluids are in the Earth, allowing us to better understand the role of fluids in modulating these natural hazards.”

On the second voyage, which set off from Wellington over the weekend, scientists deployed seabed seismographs and sensitive seafloor pressure sensors off the coast of Wairarapa and southern Hawke’s Bay.

“The instruments will record earthquakes and small seafloor movements over parts of the Hikurangi subduction zone that cannot be monitored from land,” GNS Science said.

The data collected on the second voyage would provide information to help investigate the physical conditions inside the Hikurangi subduction zone and find out what causes frequent, slow-motion earthquakes [lasting weeks] to occur there.

They can detect slow-motion earthquakes offshore and may also provide evidence about how the zone will behave in future large earthquakes, Wallace said.

Hillman said working with international research partners was hugely beneficial because they brought technologies not available in New Zealand.

The two voyages represented more than $4 million of co-funding from international partners.

The voyages were supported by funding from Ministry of Business Innovation and Employment’s Endeavour Fund and the Marsden Fund administered by the Royal Society.

Time on Niwa’s research ship Tangaroa was supported by MBIE through the Strategic Science Investment Fund.

Science behind the shakes

What are tectonic plates, and where are they?

The Earth’s outer shell consists of the crust and uppermost mantle and is divided into a patchwork of large tectonic plates that move slowly relatively to each other.

There are seven-eight major plates and many minor plates.

The plates that New Zealand is at the boundary of are the Indo-Australian plate [also referred to by GNS Science as the Australian plate] to the west, and the Pacific plate to the east.

These plates are moving all the time, anywhere from 0 to 100mm a year.

This movement of the plates can cause earthquakes and tsunami’s when it is sudden.

There are three main kinds of tectonic plates boundaries, the Hikurangi subduction zone is a convergent boundary.

This means that the two plates are hitting one another, and one of them is sinking underneath.

In this case, the Pacific plate is sinking underneath the Indo-Australian plate and pushing up the land that New Zealand sits on.

Over millions of years, this is what has caused our countries mountain ranges – notably for Wairarapa, the Tararuas.

What is a subduction zone?

A subduction zone is where one tectonic plate slips down under the other.

“Subduction zones are a type of fault and are responsible for the largest and most powerful earthquakes and tsunamis in the world, such as Sumatra 2004, Chile 2010, and Japan 2011,” according to GNS Science.

A subduction zone will often form in two instances, the first is when oceanic crust [which is significantly thinner than continental crust] collides with more oceanic crust.

Island arcs and oceanic trenches occur when both the plates are made of oceanic crust.

The second way that a subduction zone can form is when oceanic crust collides with continental crust.

The denser oceanic crust subducts below the lighter continental crust.

How does this cause earthquakes?

This means that the tectonic plates are constantly moving against one another, rather than all at once.

At the deepest parts of the subduction zone, the plates can move past one another easier, according to GNS Science.

At shallower depths, the plates are more ridged, and the “friction between them causes them to temporarily lock into place with one another,” GNS Science said.

“Over time, the stress at the locked zone builds up. Every few years the plates temporarily come unstuck, and a slow slip event occurs. This releases the built-up stress and the earth’s crust rebounds,” GNS
Science said.

The energy is usually released at a slow slip event over weeks and months rather than in seconds like the earthquakes we are used to.

However, sometimes the movement between the plates isn’t slow, but instead the energy is released suddenly, “causing strong and damaging earthquakes”, GNS Science said.

This is usually the case when the two plates have been locked together for long periods of time, and have built up large amounts of energy.

This can be over “hundreds or even thousands of years”, GNS Science said.

The movement of tectonic plates shapes our continents, which is slowly changing over the life of the earth.