‘Drunk as a skunk’ REVEALED: How a serial drink driver got let off the hook

Former police officer: ‘Bullying cost me my career and nearly my life’

Police “stubbornness” resulted in a serial drink-driver getting off the hook.

This is according to former Wairarapa police officer John Woodward who is risking it all to shed light on serious issues in the police force, including a toxic culture of bullying.

Woodward, now based in Carterton, was the charging officer of a 2017 Wairarapa case in which a driver crashed into a power pole on Western Lake Rd.

Police withdrew the drink-driving charge because they said the charging officer was not available. 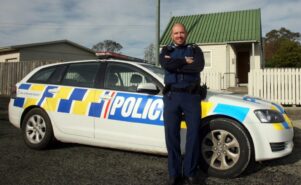 John Woodward outside the Martinborough Police Station in 2015.

At the time of the court case, Woodward had left his job after years of alleged bullying and petty behaviour in Wairarapa and West Coast where he was labelled a “nark” by colleagues for speaking out against “boy’s club” behaviour.

The first Woodward knew of the charges being dropped against the driver was when he read about it the next day in the Times-Age.

“I remember reading the Times-Age myself and thinking, this guy got off?”

He said police never requested him to go to the court hearing because “they were too stubborn to communicate” with him.

“They could have summonsed me on this.

“Of course, I would have gone, the guy was absolutely drunk as a skunk, crashed into a power pole and nearly killed somebody.

“That’s the whole reason you get out of bed in the police – to stop that stuff happening.”

The driver was instead charged with careless driving which meant he could be back behind the wheel after four months.

The same driver had previously been jailed and twice indefinitely disqualified for driving drunk.

In 2017, Times-Age had requested more information on why the charging officer had been unavailable through the Official Information Act.

In response, Times-Age received a 74-page document full of redacted pages and information [pictured below].

Fifty-two of these pages were completely redacted, and the rest were partially redacted.

‘Toxic’ culture in the force

In recent weeks, Woodward has become a whistleblower against “toxic” behaviours in the police force.

New Zealand Police shifted Woodward to Martinborough in 2015 because they could not guarantee a safe or happy workplace on the West Coast, Woodward said.

As a former member of the Armed Offenders Squad, Woodward said he was told there could be an “accident” at the training session he was hosting, and he could be shot.

He said colleagues had also removed ammunition from his weapons and gear from his vest as a “prank”.

Within months of the shift to Martinborough, Woodward received a Silver Merit Award from New Zealand Police Commissioner Mike Bush for his part in catching murder suspect Aaron Rhys McDonald on the West Coast of the South Island the year prior. McDonald is now serving a life sentence for killing a woman.

“I was chasing a kidnapper and a murderer.

“He presented a gun at me, he set my car on fire, he threw Molotov cocktails at me.

“Not long after that award was given, it all went south.”

In early 2017, Woodward became an acting sergeant in South Wairarapa.

Problems arose when a Wairarapa-based police dog handler stopped attending jobs as required due to a “beef” with Woodward.

The officer had told Woodward’s colleagues that he was “a nark from the Coast and couldn’t be trusted”, Woodward said.

“The dog handler is a tool – the same as a firearm or car.

“If you go lock someone up and you have a scuffle, the tools available are hand to hand combat, baton, pepper spray, taser, gun, car, and dog.

“A job may be above a baton, but we don’t need to shoot this person, so we can probably use a dog.

“[The dog handler] wouldn’t turn up to jobs … So, it goes from using a baton to shooting someone.

“If one of my staff had to shoot somebody because [the dog handler] didn’t turn up because of a beef with me, I couldn’t stomach it.”

Woodward said police management failed to sort out the issue.

Woodward went on stress leave because of the alleged toxic and unsafe work environment, and focused his attention on his woodchopping business he runs with his wife Serena.

At that stage, a secondary employment form he had with the police had expired.

“Police’s focus then changed from me being on leave and what they could do to fix the work environment to a total fixation on me not filling out this form.”

Because he was anxious about filling the form in at a police station, Woodward sent an email to police confirming his secondary work.

Woodward’s wife, who is also a former police officer, said there were several occasions where police patrol cars would slowly cruise past and stare while she and Woodward were out on their deck.

When Woodward ran out of sick leave, he said there was no way he could return to work because the issues that sent him on stress leave had not been resolved.

“I was given a settlement … came out with a couple of week’s wages and I was never allowed to speak ill of the police.”

Since voicing his concerns in the media, New Zealand Police have told Woodward to retract his statements to media about being bullied or face legal action.

The demand came just hours after Bush announced a review into how complaints of bullying are dealt with.

When Woodward’s allegations were forwarded by the Times-Age to police for comment, a police spokesperson said bullying was not acceptable in the force.

“We are committed to achieving better outcomes for our people,” the spokesperson said.

“Eliminating bullying from within our organisation – and ensuring that if it does happen, it is addressed as quickly as possible – is a priority.

“Police takes its responsibilities under both employment law and privacy legislation very seriously.

“This means that we are unable to discuss full details regarding individuals who choose to speak to the media about their experience of working for New Zealand Police.

“This puts us in a difficult position because we are unable to respond properly to allegations which are made or present our understanding of the situation.”

The spokesperson said Woodward left New Zealand Police with “all employment matters settled as part of a full and final agreement”.

Woodward has set up a Givealittle page to raise funds for legal action if required.

“I don’t want anyone to read this and think I’m anti-police. I’m not. I’m anti toxic culture and bullying,” Woodward said.

“Bullying cost me my career and nearly my life.”