Praying for rain before mid-January

Wairarapa is the driest place in New Zealand, with some parts bordering on drought conditions.

Worst impacted is coastal Wairarapa, and it may be dire straits for the farming community over summer, Castlepoint Station manager Jacques Reinhardt said.

With an annual rainfall of just 673mm at Castlepoint Station this year, compared with 1370mm in 2018, “reserves aren’t in the soil water-wise”, Reinhardt said.

Adding to the problem is an average windspeed of 42.5kmh over October and November, creating drier conditions.

He said the station’s summer crops were also not well established which would cause further “major issues”. 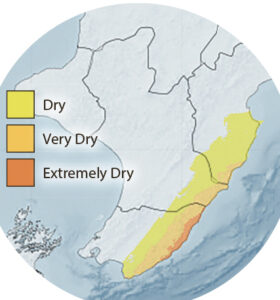 National Institute of Water and Atmospheric Research meteorologist Seth Carrier said for the past few weeks, a hotspot had been declared for coastal Wairarapa.

Persistent hotspot regions have the potential to develop into drought, Niwa says.

Soil conditions along Wairarapa’s coast have been labelled “extremely dry” on the New Zealand Drought Index.

It is the only place in New Zealand with that severity.

Further inland in Wairarapa, the soil is labelled as “very dry”, and “dry”.

Reinhardt said if there wasn’t decent rainfall by New Year’s Day, “we’re going to have to make some more big moves”.

“We’ve had people praying, people dancing for the rain – I might have to start myself.”

Carrier said there was a chance of rain next week, but that it would be unlikely to alleviate the problem.

He said westerly wind flow predicted for December and January would result in further dry conditions, but that there would be a northeasterly turn from the middle of January “which would likely mean some good news in terms of getting rainfall”.

“If we’re going to make a summer recovery, it’s likely to be in the second half of summer.”

Wairarapa Federated Farmers president William Beetham said if the dry spell continued, “it will be a real concern for farmers”.

“A lot of the guys who would normally buy those lambs to grow them out further are not buying at this point of time because it’s dry and the crops aren’t quite ready.”

He said dairy farmers were slightly down on production.

“As it gets drier, they’re going to have to consider more supplementary feed, or drying cows off earlier.”

Fortunately, a lot of concern was alleviated by “very high product prices at the moment”, he said.

“If we do start to get rain, a lot of those crops will recover, and we will get reasonable yield.

“If we do get reasonable rain over the next month, that will carry farmers through – that’s the biggest thing.”

He said by mid-January, if there was not enough rain, it would be very difficult for farmers.

“Dairy farmers will have to bring in supplements, we’ll start to see irrigation restrictions, and we will also see sheep and beef farmers struggling to shift stock and crops just won’t grow.

“If the dry spell continues for another month, it will be a big concern.