The club will field a senior men’s team in Capital Division Four, possibly five teams in the local leagues, three in the Capital junior leagues, and about 25 teams in junior competitions.

They return to the Wellington competition for the first time since 2016. 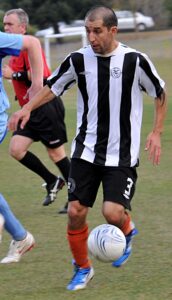 Riki Riddell, one of the coaches for Douglas Villa Magpies.

The Magpies will again be coached by Dan Pawson, Riki Riddell, and Nathan Cottle – the architects of their 2019 success.

The team have already been dealt a big blow, with their influential captain Troy Burling ruled out because a knee needs to be operated on.

However, Douglas Villa president Cory Burling said there were plenty of positives – the team’s promotion had attracted some new players.

“We had 28 players at training [last] Wednesday night, but at this stage we don’t know the make-up of the team.

“We’ll have to wait for transfers to come through and won’t know until close to the start of season.”

“We’ll have a feeder team for the Magpies in local league Division One, the three existing teams from last year, Megabeens, Skulls, which are definitely social teams, and the old Pak’nSave-sponsored team that went between Division One and Two and, hopefully, another social team in Division Three,” he said.

The senior teams are training at Trust House Memorial Park every Wednesday at 6pm and Cory Burling said new players were welcome to join in.

He said the club are talking with Capital Football about playing some of their Capital Division Four games on the artificial turf.

It is at junior level where Douglas Villa have tasted success in both Capital and Wairarapa junior leagues.

The club’s 14th-15th grade team won the Capital A Grade last year after starting the season in C Grade and then finishing second in the B Grade, earning promotion to the top division, which they won by beating Brooklyn Northern United Alliance Kaka in the final.

The club are entering teams in the Capital Junior Leagues in the 12th, 13th, and 14th grades.

Last year, Douglas Villa had 25 teams in the Wairarapa junior competitions, easily the most of any club in the regions, and Cory Burling predicted the club could exceed that number this year.

“The way registrations are going already, I’m picking that we’re going to have more, and that is when we’ll need help with organising and running teams on Saturday mornings,” he said.

“We’d ask for parents to step up for the younger grades. We won’t just leave them to it, and we offer good coaching education, and management and volunteer support.”

One of the highlights of the season again will be the club’s annual junior tournament which attracts more than 1000 players, many from outside the region, in late September.

Douglas Villa are holding junior registration days at their clubrooms at the Park Sportsground tomorrow and on March 7 from 9.30am-noon.

Cory Burling was urging parents to register their children early to ensure the teams can be organised well before the start of the season.