Don Farmer Trophy back where it belongs – in Mauriceville It’s not quite been seven years of hurt for Mauriceville, but the village finally turned the tables on the Wairarapa Times-Age in their annual 25-over match on Sunday for the Don Farmer Trophy.

Home captain Tedi Nootai won the toss, and with her intimate knowledge of the Mauriceville School pitch, sagely elected to send the motley collection of visitors in to bat.

The Times-Age clearly missed the power and aggression of publisher Andrew Denholm who starred with the bat in previous years, and the tactical nous of editor Grant Harding but the ring-ins rounded up by reporter Emma Brown on Sunday morning started in fine fashion.

Openers Sam O’Reilly and Logan Barham put on 39 for the first wicket. 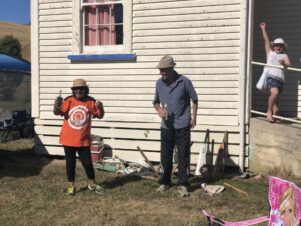 From there, it was slim pickings before Barney Woollard’s composed knock of 15 – ably supported by Allison Woollard in a fine display of marital harmony at the crease.

Set the target of 114, Mauriceville cruised home with wickets and overs to spare.

Young Jamie Trillo struck the winning runs for the hosts.

It was a famous win for country over town and next year’s contest is already eagerly anticipated by both teams.