Dog trialists are a breed apart Heading dogs, huntaways, owners, spectators and other dog lovers are all in Masterton for one of the year’s signature dog trials this week.

More than 500 sheepdogs and 400 fans headed to the steep hills above Caves Rd, just outside Masterton, to watch the best canines and their handlers vie for coveted titles at the Tux North Island dog trials.

This year’s event had extra significance because it was cancelled last year due to covid-19.

The working sheepdogs were from farms as far south as Gore and as far north as Kaikohe.

The event went down to the wire, with the best seven dogs in each of four categories competing for the top price. Owners were visibly nervous.

Wairarapa and Southern Hawke’s Bay Sheep Dog Trialling Association vice-president David Sheild said there were 280 huntaway dogs and 260 heading dogs. He was not competing this year.

“It’s going very well. Our president has done a magnificent job of organising it. There has been very good support from the sponsors,” Sheild said.

“It’s good to get down to the final part with seven guys lucky enough to have another go. That’s what we all come here and try to do.” 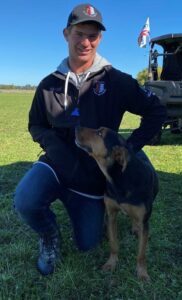 Sheild’s son George did not make the final cut, despite dog Molly putting on a good show of shepherding three sheep up a precipitous slope. Molly seemed unconcerned as she stared adoringly at her owner after finishing her slot.

“She did all right, but it didn’t go that well. There have been better runs than hers,” George said.

He was philosophical about his performance and said he would try again next year.

“She didn’t make it before. It’s real high-level here.”

Based in Tolaga Bay, George had trained five-year-old Molly since she was a puppy and she had qualified for the national event every year since she was two.

He said it took about two years to get a dog ready to compete, with up to three hours a week of training.

Five-time New Zealand title holder Lloyd Smith was there from Palmerston in the South Island with his dogs Ted, Ruby, Jackson, and Charlie.

Smith had 10 dogs, both huntaway and heading. He won his first title in 1983 and had placed 60 times in addition to the wins.

“I was quite young and pretty inexperienced at the time [of the first win], so it was a big thrill.

“Since then, I’ve been competing every year,” he said.

Smith was waiting for the results to see if one his dogs had made the final seven.

The North Island sheepdog trials take place every year. The New Zealand trials would be held in two weeks in Gore.